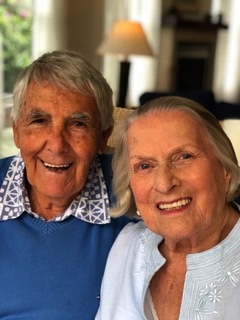 A Blackwall couple celebrated their 65th wedding anniversary on October 28, surrounded by family.

After first meeting at Chatswood aged just 18 and 16, the two had their first date at a Hawkesbury Agricultural College dance where Mr Phipps was studying at the time.

Six years later, the couple was married at St James Church at Turramurra.

A dressmaker by trade, Mrs Phipps made her wedding dress and the bridesmaids’ dresses for the big day, before the couple honeymooned on the beach at Coolangatta.

After moving to Blackwall eight years ago, the couple said they absolutely love their home, neighbours and location, and would not live anywhere else.

The Phipps regularly board the Palm Beach ferry to visit their two children, David and Deb, and four grandchildren in Avalon, Sydney.

“David and I love to watch our parents laugh together and share the love they have for their rag doll cats, Jess and Paco,” she said.

“They kiss each other good morning every day, still hold each other’s hands, share many cups of tea and enjoy their brandy and scotch at sunset.

“There are not many couples that have been able to find the solid friendship needed to reach this goal.”

In retirement, the couple have sailed up and down the coast on their beloved yacht ‘Matelot’ and travelled around Australia in a caravan.

The couple said their secret to such a long marriage was to have open communication, find the humour in situations and to never let the sun set on an argument.

David Phipps said his parents’ relationship had taught him that any issue can be worked through.

“Knowing that they’ve worked hard to stick together through bad times and good has shown us both that a long marriage is achievable,” he said.

“They worked on the land for many years which can only be successful if you have a strong partnership.”

Love lives on for Reg Foster

Over 200 performers on 3 stages at 20th GOATS festival