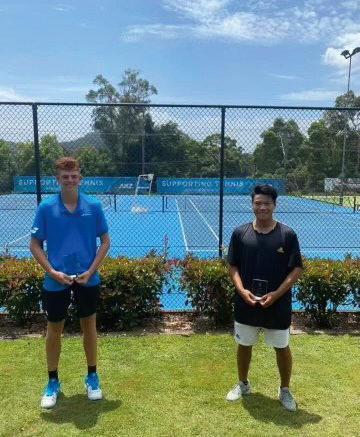 In the U10 Boys Singles, Paul De Laubadere prevailed over Mitchell Coventry Searle in the final while Zoe Liang defeated Sambhavi Selvakumar in the U10 Girls.

Kelly Leeming continued his stellar season with another win in U12 boys, this time proving too strong for runner-up Rafael Norris.

In the U/12 Girls, Lavinia Camara defeated Bridget Broome, while in the U14 Girls, Stacy Sunhwa prevailed over Chloe Hanger and Flynn Searle defeated Harvey Brimbecom in the U14 boys.

Owner Lees took out the silverware in the U16 boys while rising star Jessica Jeong took out the U16 girls, defeating Vidhi Parekh.

Local sensation Nicholas de Vivo put on a powerful display once again, this time defeating Matthew Quach in the final.

This weekend will see the open club championships contested with the promise of more good weather and scintillating tennis.

On December 27-31, the GTC will host UTR Junior and Opens UTR events, both of which are again expected to attract over 200 competitors.