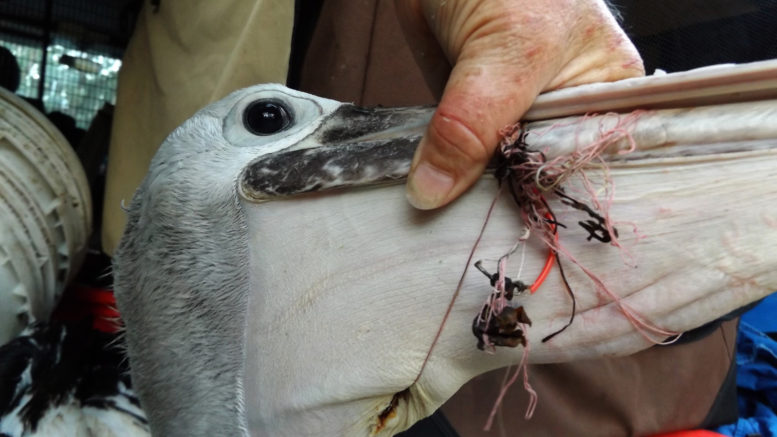 A pelican entangled in fishing line

With a La Niña weather pattern recently making its presence known over the east coast, Wendy Gillespie, aka ‘the Pelican Lady’, is urging Peninsula residents to keep an eye out for any impacted and injured pelicans.

Flash flooding, damaging winds and hail are all on the cards throughout the season, with potential to bring harm to pelicans, ducks, ibis, seagulls and land birds – especially those that drink from storm water discharge points.

During the last recorded event in 2010-11, Gillespie said she was rescuing up to three sick pelicans a day, with many of them dying due to neurotoxins in the water.

She said many local pelicans had been repeatedly rescued and off-leash dogs are also a major threat.

The costs for rehabilitation of each bird can range up to $150 and two weeks of intensive care is needed once debilitation sets in.

This occurs from significant dehydration, paralysis and then organ failure.

She said early reporting of sick birds throughout the area can help save their lives and pleaded with the community to not drop them to the vet as euthanasia is prematurely performed.

Gillespie recognised recreational fishing impacts account for 90-95 per cent of pelicans rescued in the area, with 31 lost over the decade due to malicious knife damage, and damage from triple-ended lure entanglements.

“Only about 5 per cent of pelicans needing rescue will be seen or reported by the public, which is why proactive surveying is so vital,” she said.

“Over 300 have died during my full-time attempts over 10 years to rescue and rehabilitate them with a strong bias towards nesting males.”

After arriving in Woy Woy 10 years ago to undertake postgraduate research on the human impacts on pelicans, Gillespie said she couldn’t leave after seeing the significant number of sick and dead pelicans in her first year of research.

She has consequently dedicated the last decade to rescuing, researching and attempting to gain a co-ordinated government long-term resolution to the source of sickness and mortality on the Peninsula.

In 2016, the NSW Environment Protection Agency sampled the primary large open arterial drain that runs beside the Peninsula Leisure Centre and discovered pelicans and other water birds were becoming sick, paralysed and dying from ingestion of “blue green algal toxin”.

Yet in 2018, the Office of the Minister for the Environment sent a letter stating a nine-month investigation was conducted into the canal next to Blackwall Rd to monitor for algae and water pollution indicators.

The investigation concluded that during the monitoring period, no toxic species of algae were identified in the canal and no details of pelican deaths or illness had been recorded.

Gillespie said the report was a “dishonour and disgrace” and doubled downed on her claims the algal material was the source of the sickness and deaths in pelicans.

It is estimated a total of 982 pelicans have been rescued during her 10 years of service.

With her annual costs to run the service said to be at $10,000 plus a loss of professional wages, Gillespie is now inviting the wider Peninsula community to assist in the future funding and success of the program.

She thanked her partners Janet and William, Fishermen’s Wharf managers and staff for fish supplies and support, St Vinnies Woy Woy for linen, and vets from the Animal Referral Hospital at West Gosford.

With three parent pelicans lost in just the last few days and a 13-week-old in danger, Gillespie has asked residents to contact her on 0458 975 498 if a sick pelican is spotted.