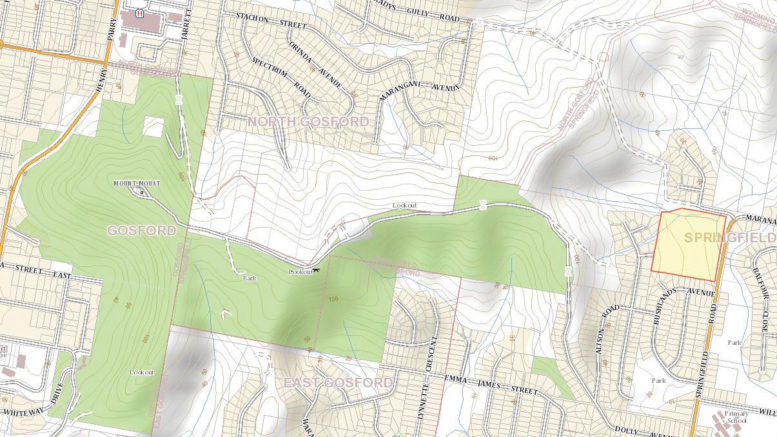 An 18-lot subdivision at Springfield has been given the green light by Central Coast Council, with a Deferred Commencement consent giving applicant Malachite Holdings five years to begin work on the project.

A Statement of Environmental Effects (SEE) lodged with the application, for 89 Springfield Rd, says the lots will range in size from 550m2 to 1,234m2 and will be delivered in one stage.

The subdivision will also include the construction of a minor local road, bulk earthworks/benching and retaining.

Water, sewer, stormwater, power and telecommunication services will also be provided under the proposal.

The SEE says the site is zoned R2 Low Density Residential Zone and complies with all relevant provisions of Gosford Local Environmental Plan 2014.

The proposed development site is located on the western side of Springfield Rd, south of Marana Rd and surrounded by residential houses on all sides.

The eastern and northern boundaries of the site have road frontage to Springfield Road and Marana Road respectively, but the SEE says access from these points is not possible due to an E2 zone across the site.

To avoid impacting upon the E2 zone, access has been proposed from Yellow Box Ave, a short dead-end street.

“The growth of Springfield is limited by the vegetated lands to the north,” the SEE says,

“For this reason, many established areas have been developed using cul-de-sac streets rather than a connecting grid pattern.

“The subject site has followed this trend.”

The SEE says only 1,8ha of the 4ha+ site will be developed because of the E2 zoned portion, which includes various watercourses.

Only four submissions were received opposing the proposal, three of them opposing access to proposed development from Yellow Box Ave due to increased traffic through narrow Woodview Rd.