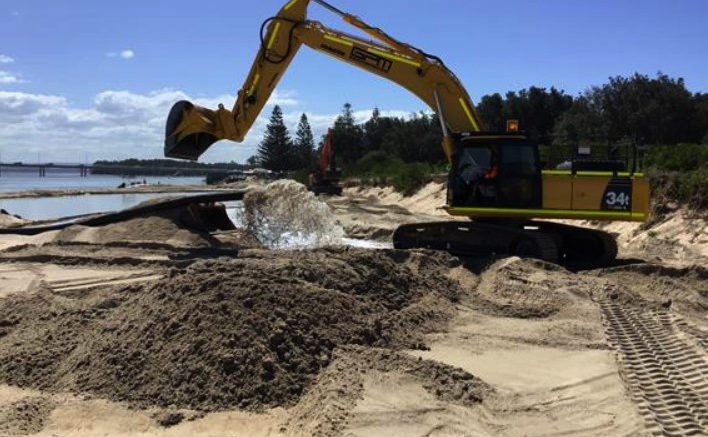 Central Coast Council has wrapped up its dredging program at The Entrance Channel for the year, with about 25,000 cubic metres of sand removed and in line with its $1.2M budget.

Once the work site at Karagi Reserve carpark is pulled down and the transfer of sand to The Entrance North Beach is finished and stabilised, the forecast budget will have been exhausted.

“The dredging program has been completed as planned and to budget,” a Council spokesperson said.

Council had $1.2M for this dredging program, comprising a $600,000 State Government grant, which was matched by Council, to remove 60,000 cubic metres from the channel.

Severe floods in February naturally removed about 143,000 cubic metres of sand from the channel, and although some sand subsequently returned due to natural coastal process, Council says the amount of sand required to be removed as part of the 2020 dredging was substantially reduced.

By September, when dredging started, the target was 30,000 cubic metres of sand from the channel, to replace sand on The Entrance North beach eroded during the July storms.

Council’s Environment and Planning Director, Scott Cox, said the dredging program looked very different to previous years, with new and increased Environment Protection Authority (EPA) requirements such as the dewatering area being inside the channel before sand was transferred to nourish North Entrance beach.

These changes meant significant increased costs associated with the management of dredged material, he said.

“I am pleased to report that all EPA requirements were met during the program this year and we have met our primary targets of recovering sand from the channel for use on the eroded beach at The Entrance North, as well as removing sand from key identified areas within the channel to help enhance water exchange and navigation,” Cox said.

In a first for Council, two dredges were used simultaneously so that sand could be removed from two areas of the channel at the same time.

This allowed for the work to be done in a short timeframe, reinstating the area before the busy tourist season and reducing potential impacts on the nesting of the Little Terns.

The Karagi Reserve carpark work site will be packed up over coming weeks and there will be some stabilisation work along the reserve foreshore using rocks recovered during the July coastal erosion.

As the channel dredging finished ahead of schedule, residents on the western shore of Tuggerah Lake were hoping to see the dredges relocated there to clear out river mouths and creeks, including a navigation channel at Chittaway Creek and the heavily silted Ourimbah Creek.

A spokesperson said Council has no current authority, approvals or funding from the State Government, as the regulator and land owner, to undertake dredging at those creek mouth locations.

“Previous consideration of programs at Tumbi Creek and Ourimbah Creek suggest that dredging programs at each of these locations would cost in the order of $10M each, largely due to increased costs associated with disposal of dredge spoil,” the spokesperson said.

Just before Central Coast councillors were suspended, former The Entrance Ward councillor, Jilly Pilon, questioned the whereabouts of the $4.7M that she secured in the 2019 Federal election, specifically earmarked for Tuggerah Lakes.

Approved projects, with expected completion by 2022-23, include: wetland and threatened species habitat conservation; streambank and catchment improvement; 13ha of saltmarsh rehabilitation; foreshore and water quality improvement; and, research, investigation and planning as well as community engagement and education.

Future dredging programs at The Entrance Channel have not yet been determined and further programs will depend on State Government funding.

They will not supply a dredge – stop asking