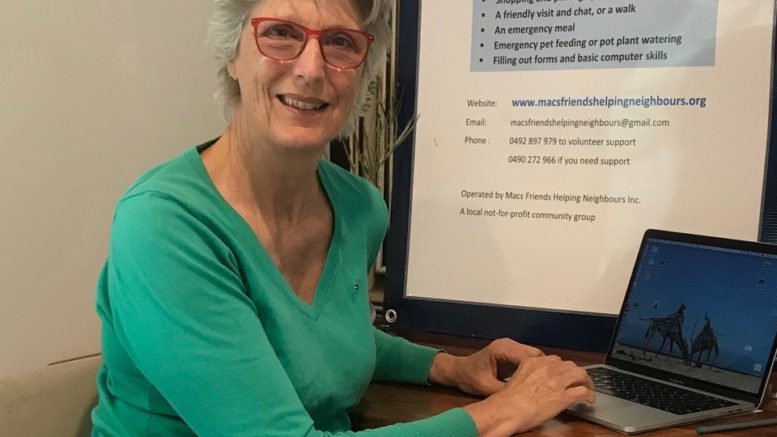 Macmasters Beach residents are looking after their own with a group of volunteers offering a variety of services for the elderly and those in need.

Macs Friends Helping Neighbours is the brainchild of resident Jill Danks, although she is quick to point out that the idea was inspired by a similar group operating in the Killcare/Wagstaffe area (Killy Cares) and an informal service offered for many years by the Macmasters Beach Ladies Social Club.

Killy Cares is a community­based charity established to draw on the expertise and compassion that exists within the local community to support and assist others, especially the elderly, in times of special need.

“We have formalised the service formerly offered by the Ladies Social Club and taken it a bit further,” Danks said.

“It’s all about helping your neighbours, with around 40 volunteers already having registered to lend a helping hand to others – to older people, those who are ill, or those who simply need a hand with simple tasks,” Danks said.

“We can take people to attend medical appointments, get prescriptions filled or shop, or just help with things around the home.

“We first got the group going in January and then everything went down due to COVID.

“We had promoted ourselves to doctors so they could let patients know the service was available – and then, all of a sudden, we couldn’t do it.

“During the months since we have been able to do some things, like post parcels, do shopping, pick up scripts.

“We do small chores like change light bulbs, smoke alarm batteries and tap washers – nothing which would take business from local tradies, just little jobs an older person couldn’t do.”

Just recently, Danks said, four volunteers had worked in shifts looking after a little dog which had had surgery while its owner worked as a nurse, prompting a heartfelt thanks on the group’s Facebook page from grateful owner Libby Borgos.

Borgos praised the volunteers who had cared for Humphrey the dachshund while he recovered from back surgery, saying it was an “awesome service”.

Danks said because of coronavirus, the number of people who had registered for help was small.

“People have to have confidence to let a stranger into their home, so we have given ourselves a few years to build up that trust and confidence,” she said.

“All of our volunteers have had police checks ad are fully insured.

“Anybody we help has to read our operating principles and agree to them – for example, we can’t do banking or put a password into a computer for someone.”