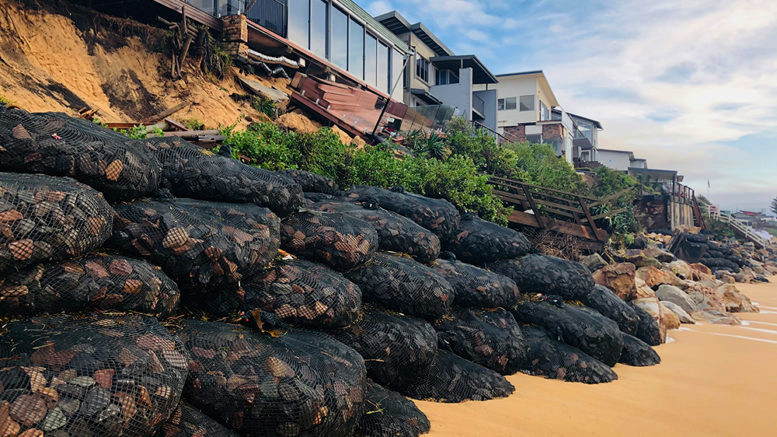 A squabble is brewing over who should pay for the emergency works put in place to address coastal erosion sustained during heavy storms in July at North Entrance and Wamberal.

Central Coast Council says the State Government directed Council to do the work when the storms hit and flagged it would pay the costs.

According to Council’s Environment and Planning Director, Scott Cox, Council has now been told the State Government will pay for 50 per cent of the work at Wamberal and for none of the work at North Entrance.

Cr Louise Greenaway said the Council doesn’t need bailing out – it simply needs the State Government to pay up what it owes Council.

Last week Parliamentary Secretary for the Central Coast and Member for Terrigal, Adam Crouch, said the State Government wouldn’t “bail out” the council after it revealed serious cash flow problems.

The problems grew worse with further revelations this week it couldn’t pay staff.

The Mayor said the LEOCON (Local Emergency Operations Controller) had directed Council to do the work.

Cr Jilly Pilon said she understood Council had raised concerns about not being paid for the emergency works and she understood that Terrigal MP Adam Crouch wrote to CEO Gary Murphy in September saying that on July 17 the Minister for Local Government had committed to helping with funding.

That letter said the Minister had told Council it would rapidly assess any funding requests.

Director Cox said staff had put in two applications under the estuary and coastal grant program, the significant open coastal hazards grant funding, and the response had been that no funding would be given for the North Entrance as part of that grant program and the Department would pay 50 per cent of the costs associated with Wamberal.

“Staff then had to amend their application … and staff were going to work on other ways of perhaps writing to the Minister about outstanding costs that weren’t going to be paid through the grant process,” Cox said.

He said the North Entrance was knocked back because it wasn’t mentioned in the Gosford area Coastal Zone Management Plan (CZMP).

He said the CZMP (for the former Wyong area) was not certified.

However, Cox said emergency works weren’t in the CZMP for Gosford area either.

The CZMP for the former Gosford area identified the extent of emergency work would be beach nourishment and emergency works would be the private landowners’ responsibility.

Meanwhile, since that meeting, a Council spokesperson said Council staff remain in discussions with the State Government to try to recover all costs.