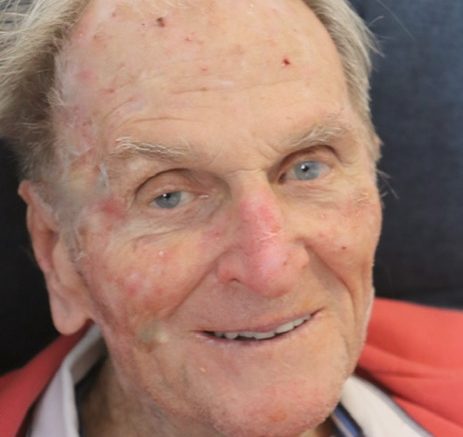 September 21 marks the beginning of Dementia Action Week 2020 and to participate, Hamlyn Terrace’s Hakea Grove Aged Care has shared the fascinating life story of one of its residents, Thomas ‘Tony’ Farthing, as an inspirational resident in the memory care unit.

“His father, Thomas Farthing Senior, was a well-known Australian jockey who had been racing the Asian circuit.

“In July 1940, at the age of 6, his mother, Molly Farthing and his father saw WW2 gathering over Europe.

“With the Japanese threat increasing, Molly took Tony and his brother Peter back to Australia to stay with their grandmother at Randwick before returning to her husband in Singapore.

“On February 13, 1942, Qantas Pilot Captain Crowther flew from Singapore, landing in a chaotic war zone, to become the last flight out of Singapore, with 41 female passengers, including Tony’s mother.

“His father remained in Singapore and was taken as a Prisoner of War.

“He was repatriated home three years later with medals of honour.

“What happened to his parents left a lasting impression on young Tony, who would go on to become a steward with Qantas in the 50’s, before meeting and marrying his wife Faye, with whom he had two children, Tracey and Paul.

“Qantas continued to play a major role in the Farthing family’s lives, with Tony remaining a loyal employee for 33 years.

“It was during Tony’s time as flight crew that he was given the nickname ‘Brave Eagle’.

“He was lucky enough to be a part of history in the making, overseeing the 21-day tour to the USA by Gough and Margaret Whitlam when he addressed the United Nations.

“Tony and his crew were made special guests by Gough and it would not be the last time his work would see him rub shoulders with dignitaries, elites and even royalty, with Tony counting the chance to attend to Princess Margaret during one of his flights among his greatest honours.

“Comically, Tony also served Kerry Packer a multitude of times, much to his chagrin, as his daughter, Tracey, recalls.

“‘Packer rang the call bell for service, and not for the first time was rude to dad.

“‘Dad’s reply to Packer was, ‘as far as I am concerned you don’t exist on this ‘plane anymore until you find your manners’.

“An article was even written about the exchange in the Daily Telegraph at the time.

“It was entitled: ‘What business magnate became a shadow unto himself not long ago on a flight last week?,’ Tracey said.

“After travelling the world, Tony retired from the airline in the 90’s as a Flight Service Director and as a well respected man within the Qantas ranks, inspiring a similar passion in his daughter, who would go on to lead her own career with the airline.

“Tony would go on to become a loving grandfather, and in his later years, a resident at Hakea Grove battling dementia.

“But while his condition has been difficult to come to terms with, for Tracey and her family, nothing can detract from the Brave Eagle’s legacy.

“‘Dad has always been there for me, come hell or high water.

“‘He has supported me and the family and is an ally.

“‘Dad is an extraordinary person and full of love.

“‘Before he came to Hakea Grove, he would still be at his beloved Coogee Beach SLSC and in the ocean every other day,’” Tracey said.

“‘Dad’s dementia takes him on adventures all the time in his own memories.

“‘Some days he has been playing golf in Beirut and not sure how he got home, but every now and then he says something, and I think to myself I know you’re in there,’” Tracey said.