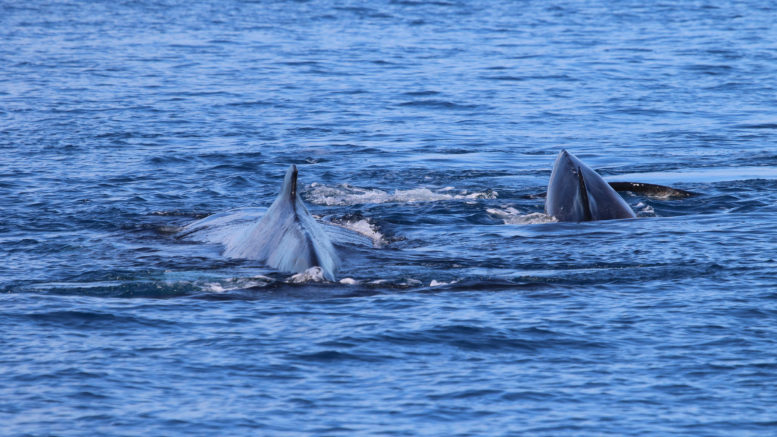 A mother whale and her calf head south

The Dolphin Project is calling for an end to the shark netting program on Central Coast beaches, with whales passing close to our shores as they head back south following their winter migration.

The Department of Primary Industries is set to begin installation under its shark nets program from this week.

But Dolphin Project spokesperson Ronny Ling said the nets posed a significant hazard to the whales, which head north to calve in warmer waters during winter and are now on their way back down south.

These mother whales are heading south past our coastline, together with their new calves, who don’t yet have much blubber,” Ling said.

“The blubber keeps them warm, helps them float and protects them from predators and the calves will continually put on more layers of blubber as they head south.

“The whales often come in quite close to shore as the calves still need help feeding from the mothers and little whales are curious and prone to explore the nets.

“We have had lots of incidents in the past with whales caught in the nets.

“We have seen sharks caught at Norah Head, Shelly Beach and Terrigal/Wamberal and, with whale numbers increasing by around nine per cent each year, we are sure to see more entanglements.

“We really should not have shark nets – all they do is catch unsuspecting marine creatures.

“They don’t really protect people on the beaches as the nets are only around 150m long and sharks can easily go around or under them.

“But they are a real trap not just for whales, but for dolphins, penguins, and other marine life.

“The nets give swimmers a false sense of security.”

Ling urged residents to call the NPWS 24-hour line if they did see a marine creature tangled in one of the nets.

The Department’s website says the beaches are netted by contractors using specially designed meshing nets to reduce the chances of shark encounters.

“The nets do not create a total barrier between swimmers and sharks,” the website says.

“They are designed to intercept sharks near meshed beaches, which reduces the chance of a shark interaction.

“While the nets cannot provide a guarantee that a shark interaction will never happen, we believe they have been effective in greatly reducing the potential number of interactions.”

The website says since the introduction of the shark meshing program along the eastern coastline in 1937, there have been 34 unprovoked shark interactions at meshed beaches resulting in one fatality, 24 serious or minor injuries and nine incidents where the person was not bitten.

In nine interactions the species was not identified; nine were attributed to Wobbegong sharks; seven to White sharks; four to unidentified Whaler sharks; one to a Bull shark; and one to a Tiger shark.