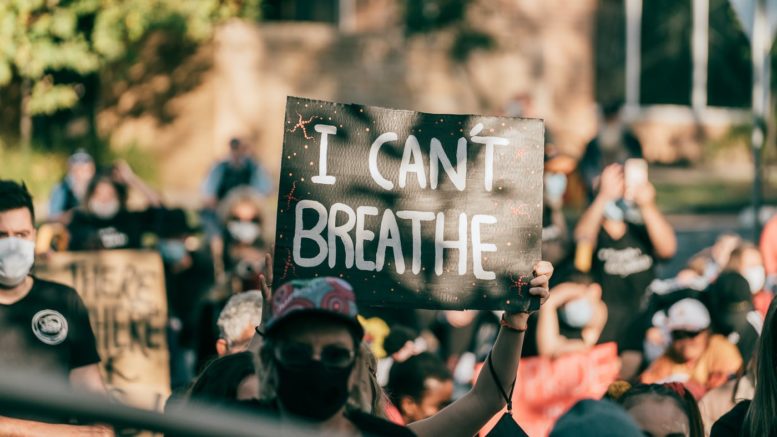 Three months on from the Black Lives Matter rally at Wyong, a new chapter in the movement is set to begin on the Central Coast.

As a direct result of the movement and the galvanisation of community support, Wyong’s Gudjagang Ngara li-dhi Aboriginal Corporation is now calling on local indigenous artists to participate in an exhibition in November, chronicling what Black Lives Matter means to them.

Open to artists working across all disciplines and mediums, the aim of the ‘I Can’t Breathe’ exhibition is to capture the essence of the movement and those powerful words uttered by George Floyd.

An African American civilian, George Floyd died on May 25 whilst being arrested.

His death sparked global protests against institutionalised racism and police brutality, and in Australia, it reinvigorated debate over the way that Aboriginal people are treated, with the 432 indigenous deaths in custody since 1991 a stark reminder.

In NSW, parallels have also been drawn between Floyd and David Dungay, who’s death was also caught on camera and sparked a national outcry.

CCTV and audio footage show five guards forcibly restraining Dungay for a cell transfer before a nurse injects him with a sedative, Midazolam.

Shortly after, he lost consciousness and died.

In the audio, Dungay can be heard screaming “I can’t breathe,” at least 12 times.

With the exhibition being planned for November at Gudjagang’s community hub on Church St, the corporation is now keen to hear from community members interested in being interviewed on the BLM movement for a video project to be screened during the exhibition.

They’ve also put a call out to the community for photos from the Wyong rally which will be used to create a montage that will introduce the exhibition on opening night.

Brad Webb is the exhibition’s curator and believes that the community event will be the next big driver of the BLM movement on the Coast.

“The exhibition is being held to continue the momentum and narrative around Black Lives Matter locally, but it is also an opportunity for the Coast’s Aboriginal artists to come together, collaborate and produce some powerful art,” Webb said.

“I think the exhibition will be a great opportunity for our young ones to learn more about the social political struggles our people have and continue to endure, and as a practicing artist myself, I’m excited at the prospect of showcasing the diversity of Aboriginal art,” Webb said.

“I would love to see the exhibition develop into something bigger.

“There really aren’t that many opportunities solely dedicated to representing and promoting Aboriginal artists on the Coast and it would be wonderful to see Gudjagang become an ongoing creative hub.”