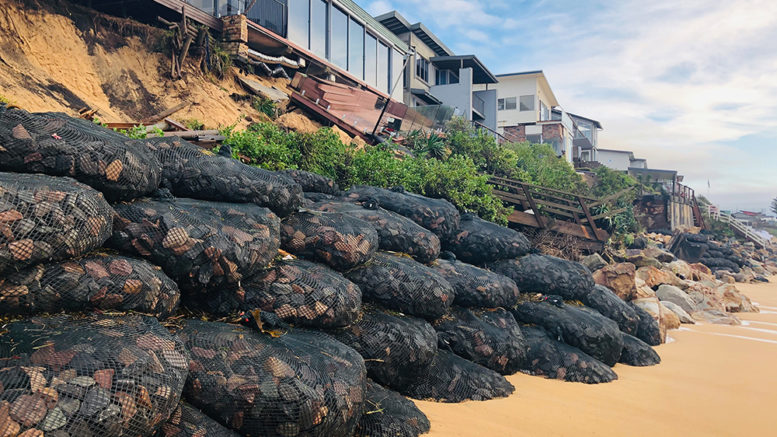 The task force announced by the State Government on July 31 to drive the delivery of a solution to beach erosion problems at Wamberal has come under fire for its lack of activity and transparency.

Parliamentary Secretary for the Central Coast, Adam Crouch, said this week that the task force had “hit the ground running” in assisting Central Coast Council to deliver a long-term solution, but the 2000-strong Wamberal Beach Save Our Sand Group (SOS) says the task force appears to have achieved nothing in almost two months.

Despite assurances the report would be expedited, the best answer Council can give on when it is likely to be handed down is still “towards the end of the year”.

Task force chairperson and coastal engineering expert, Dr Phil Watson, said the focus was on developing a range of options for community consideration that not only provide for property protection, but also take the opportunity to enhance the recreational amenity and public access along the beach.

“The task force is mindful of the importance of maintaining and where possible, enhancing the natural beach system at Wamberal as part of the planned response while delivering an improved outcome for the community,” he said.

“The task force acknowledges that broader consultation with the wider community is needed and so a noticeable ramping up of broader public consultation will occur in the next couple of months.”

But SOS founder, Justin Hickey, said his group had not yet been consulted.

“The way we see it there should be consultation with all stakeholders from the start,” Hickey said.

The group remains opposed to any revetment wall as a solution, saying such a move would severely impact the beach.

Hickey said the group was also concerned by comments made by Crouch on the Wamberal Lagoon to Lagoon Solution Facebook page pre-empting a seawall as the best solution.

Hickey also said that the group had written to Local Government Minister Shelley Hancock asking for Crouch’s removal from the task force.

“We have grave concerns about the process of setting up the taskforce and the lack of community consultation to date,” he said.

“We are seeking the terms of reference for the task force and (for) the minutes (to) be made public.

“We have spoken with other groups such as fishing charters and Wamberal Bush Care – none have been consulted.”

Hickey said the group believed the task force should be disbanded in favour of “true public consultation”.

But Crouch said decisions about what the long-term solution involves will be decided by experts, not politicians.

“The Wamberal task force is chaired by Dr Phil Watson, an internationally-recognised coastal engineer with decades of experience in coastal management,” he said.

“It is also important to note that Central Coast Council is the statutory authority for this location, and the NSW Government will continue to offer financial and technical assistance wherever possible.”

Members of the Taskforce chaired by Phil Watson include Crouch, Council CEO Gary Murphy, Paul Donaldson, Project Manager for Wamberal Beach at Central Coast Council, and three representatives from the Department of Planning, Industry and Environment.

Meanwhile, Deputy Mayor, Jane Smith, will put a motion to the Council meeting on September 28 calling for the task force minutes to be made public on Council’s website.