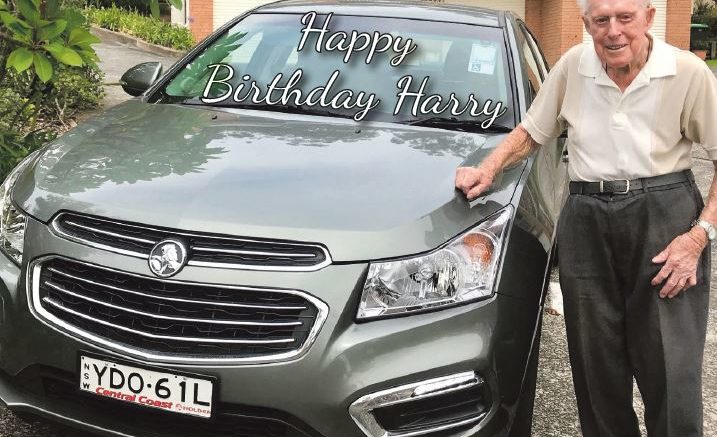 Harry May of Daleys Point turns 100 on September 15 but he doesn’t plan on slowing down anytime soon.

Still living independently at The Cove retirement village, Mr May does his own shopping and gardening and had his driver’s licence renewed just a few weeks ago.

“A lady comes in once a fortnight to tidy up a bit, but apart from that I handle everything else,” he said.

A veteran who saw service with the 35th Battalion in Papua New Guinea during WWII, Mr May has a multitude of memories, including watching the Sydney Harbour Bridge being built from a hill near his house at Punchbowl as a schoolboy.

“I remember it vividly,” he said.

“Right behind our home there was a big paddock with a high hill, and we could see eight or nine miles – right through to Sydney.

“We used to watch the bridge being built and then I walked over it just before it officially opened in 1932.

“I did it again in 1982, but that time there were about a quarter of a million people walking with me.

“I remember when the train fare to Wynyard was six pence.”

Mr May is the only living member of the 32-man 35th Battalion but does not dwell on his wartime experiences.

A clerical worker for much of his life, Mr May was married for 50 years but has no children.

“I have a nephew in Newcastle and he and his wife are my closest family members now,” he said.

“But I have wonderful friends and enjoy going out to dinner with them once a week.”

Mr May said he had led a “fairly quiet life”, had never smoked and drank alcohol rarely.

“I have never been very political, but I do remember when Jack Lang was Prime Minister and brought in the widows’ pension,” he said.

“It was just the right timing for my mother, who had four young children – I was the eldest at the age of nine and we were always grateful for that.”

Formerly a keen golfer, tennis player and cyclist, Mr May is content to fill his days with keeping his home tidy and working in his beloved garden.

“I’d say gardening and talking are my chief hobbies these days,” he said.

“I still walk every day, although these days it is with a walker – and I read the paper every day.”

Mr May said he was disappointed the milestone birthday couldn’t be celebrated with a big party.

“We were going to have a party but it’s just too hard – I have some distant relatives in Sydney but most of them are in [virus] hotspots now.

“You have to follow the rules – that’s all you can do,” he said.