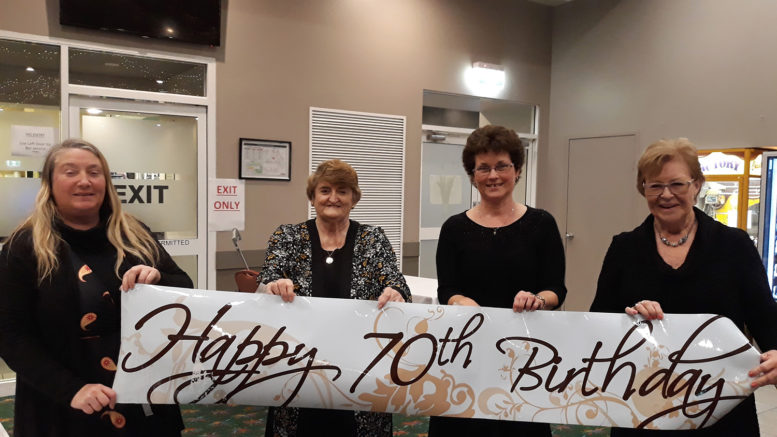 The Rotary Club of Woy Woy celebrated its 70th birthday on Friday, July 31, with more than 50 guests attending the Everglades Country Club in Woy Woy.

Master of ceremonies for the celebrations was past president Mr Don Tee who has been a member of Woy Woy Rotary since 1983.

Mr Tee spoke of the club’s 70 years of activities and initiatives on the Peninsula, in Australia and abroad.

He spoke of the charter night, where 300 people gathered at Anderson Memorial Park, which became a club project.

He listed the various community facilities and public resources the club helped build.

These included the Girls Guides Hall in Ettalong, Staples and Mt Ettymalong Lookouts, the surf clubs, the Woy Woy Olympic swimming pool and a rock pool at Umina, Koolewong Park, the Scouts and Sea Scouts Halls, a kitchen for Woy Woy Meals on Wheels and a walking track at Blackwall Mountain.

He said that, over the decades, the club reflected on the changes in society and adjusted its activities and fundraising to meet the needs of the community.

The club had active youth programs and hosted many overseas exchange students.

One significant change was the introduction of women into the club when Susan Tee (Baldock) became the first female member in 1993.

One highlight was the Woy Woy Rotary Romp in 1990, modelled on the Variety Bash, where 73 people set off with 25 cars to the Gulf of Carpentaria, raising $28,000 for Central Coast Lifeline.

In the last 14 years, the club’s major fundraiser has been Opera in the Arboretum at Pearl Beach.

Mr Tee said there had been support trips to many regional towns over the years and overseas missions, schools and medical outreaches.

Rotary volunteers had travelled for medical outreaches to Russia, Papua New Guinea and Cambodia, and most recently to Uganda to establish the current Pure Joy Women Empowerment project.