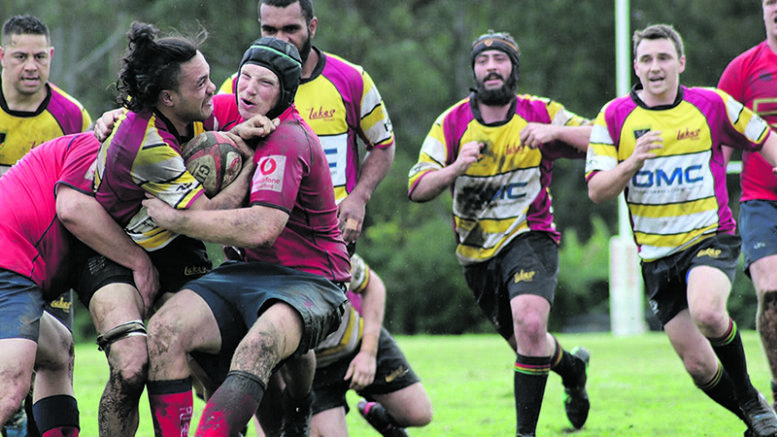 Terrigal, Ourimbah and The Lakes all remain within two point of each other on the Central Coast Rugby Union (CCRU) first grade competition ladder after wins in Round 5.

At Gosford showground, The Lakes kicked a late penalty goal to secure a hard fought win over the winless Gosford Devils, winning by the narrow margin of 20 points to 17.

In boggy conditions, Gosford took the early lead with a converted try to centre Josh McGlynn but it was The Lakes who gradually fought back and, by halftime, had taken the lead by 17 points to 7.

It seemed at that stage that The Lakes may go on with it, but Gosford returned fire with some great rugby and by midway through the second half had locked the scores up at 17 points apiece.

It was anybody’s match at that stage and it was only in the late stages of the game that a penalty goal that saw The Lakes prevail.

Best for The Lakes were No.8 Va Talaileva, centre Tomi Kaati and flanker Reihana Hemopo.

Gosford had several good performers, but none were better than centres Sam Underwood and Josh McGlynn and flanker Ryan Conaghan.

The match of the day at Mark Taylor Oval lived up to all these expectations with Ourimbah defeating Hornsby by 32 points to 12 after a close tussle throughout most of the game.

Ourimbah ran in several late tries but there was nothing between the two sides for much of the first 60 minutes, with Hornsby appearing to have the better of the first half and taking an early 12 points to nil lead.

The razorbacks seemed to grow stronger as the match progressed and were able to cross for a further four tries in the second half.

Best on ground for Ourimbah were lock Josefa Biu, five-eight Daniel Jones and prop Stephen Finley, while Hornsby were well by centre Brad Dixon, hooker Hosea Fotukava and lock Wes Faupaula and, despite the loss, sit just four point below the top three teams on the ladder in fourth position.

Avoca Beach continued their good form to defeat the Woy Woy Lions by 37 points to 12 at Woy Woy Oval.

The first half was an even affair with Woy Woy leading 12-10 midway through the first half, before Avoca Beach gained the ascendency.

The Sharks posted a try just prior to halftime to go to the break leading by 20 points to 12 and were then able to lay on four further tries in the second stanza to secure a comfortable victory in the end.

The win by Avoca Beach moves them into fifth place on the ladder and will send a message to other clubs about their intent this season.

In the final game of the round, Terrigal had a relatively easy win over Kariong at Kariong Oval, running out winners by 43 points to 8.

The Trojans didn’t have it all their own way in the first 20 minutes courtesy of some rugged defence from Kariong, but were soon able to assert themselves and cement their spot at the top of the competition table.

This weekend promises a mouth-watering clash between The Lakes and Ourimbah.

The undefeated Ourimbah will start as slight favourites, but will be facing The Lakes at home and with much to play for.

Another big match will be the clash between Terrigal and Hornsby at The Haven Oval.

While Terrigal will go into this match as favourites, Hornsby will be chastened by their loss to Ourimbah and will be keen to lock in a semi-final berth.

In many ways, the match between Avoca Beach and Warnervale at Heazlett Park may be the most important with both teams fighting for fifth spot.

The winner will get a small break on the other in this race.

In the final match of the round Gosford will host Woy Woy at Gosford Showground in what may well be an early battle to avoid the wooden spoon.