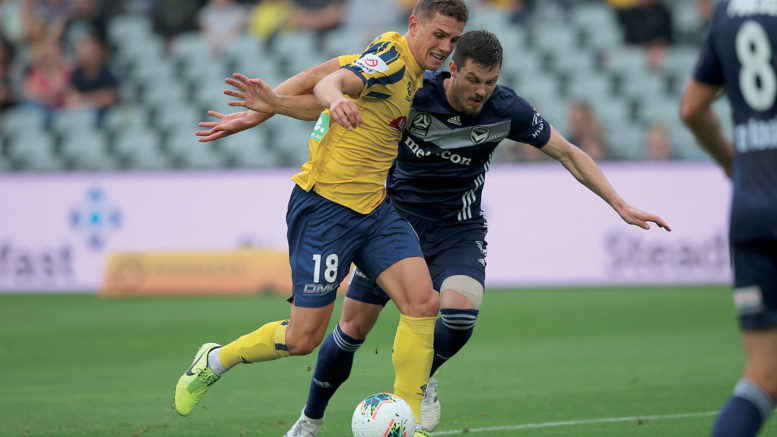 Gianni Stensess of the Central Coast Mariners contests the ball against James Donachie of Melbourne Victory during the round 14 A-League match. Photo: Ashley Feder/Getty Images

Central Coast Mariners’ owner and Chairman, Mike Charlesworth, has announced that he will seek a new owner for the club.

“After 10 years of involvement with the Mariners, I feel the time is right for me to now step aside and to look for a new investor to take on the ownership of the Club,” Charlesworth said.

“With a host of young talented players having broken into our first team and with a new independently run A-League around the corner, it’s an exciting time for the club to grow and to now move forward under new ownership.”

The club will now begin to work through a due diligence process with interested parties.

The announcement adds to the uncertainty around the club’s future.

In recent months, it was reported that Charlesworth had approached the Many Sea Eagles about a tie-up with the Northern Beaches club.

This followed earlier reports he had shopped the club to other suitors, including Canberra and Brisbane, as well as European based investors.

According to SBS (The World Game), the UK-based Charlesworth said he will hand the license back to Football Federation Australia if a majority investor can’t be unearthed.

“We’ve struggled in recent years through a lack of investment – now is the time that someone must be found to drive it forward,” Charlesworth told SBS, admitting that his remoteness from Australia hadn’t helped in his oversight of the club.

“We were in talks with a couple of clubs in Europe, but when the coronavirus came along, everything changed,” he told SBS.

Charlesworth first bought into the Mariners 10 years ago with a 30 per cent shareholding and then injected further funds into the club in 2013.

In recent years however, Charlesworth attracted criticism for running the club on a shoestring budget, leading to the loss of key players and, ultimately a string of four wooden spoons in just five years.