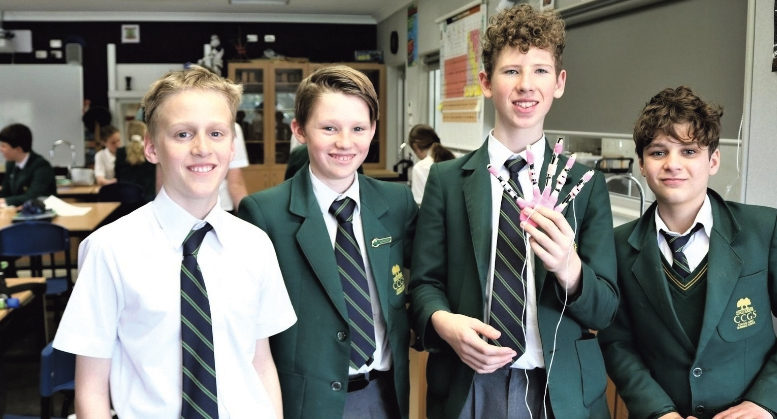 Year 8 students with their bionic hand

Secondary students at Erina Height’s Central Coast Grammar School have celebrated a week of engineering, design and innovation as part of their National Science Week 2020 festivities.

Current restrictions meant the school’s usual Science Fair could not take place this year, with the Science Department instead creating a series of challenges that required students to look at problems from all angles, come up with solutions and test them out.

Year 9 students were first up and tasked to create an apartment block that can withstand an earthquake.

A tray was then mounted at the top of the tower to place weights on before each tower was placed on vibrating exercise equipment to simulate an earthquake and increasing weights were added to the tray.

Scores were given for the height of the tower and amount of weight the tower could withstand before collapsing.

Year 8 students were next up and were tasked with creating and building a bionic hand to give independence back to patients who had lost a hand through injury or illness.

Students were able to create their ‘hands’ using only string, straws, rubber bands and blue tack.

Tests took place to see whether the hand could pick up or grasp items.

Students were also tested on the hands ability to sign letters of the alphabet.

Year 10 students were challenged to build a lightweight yet strong bridge capable of supporting a trolley carrying gold.

The lighter the bridge, the more points they received.

Only limited quantities of balsa wood, paddle pop sticks, masking tape, paperclips and thumbtacks could be used for the construction, so some creative thinking was required to create a sturdy and functional bridge.

Year 7 had the task of designing a cost effective chair that could carry the weight of two heavy family pets.

A number of design rules required students to think creatively and work together as a cohesive team to design a chair that met the specifications.

Teams were penalised if they used too many resources that would add to the cost of the build.

With each challenge designed to test and develop students’ critical, design and creative thinking skills, staff were pleased to see so many excellent and successful designs across the board.