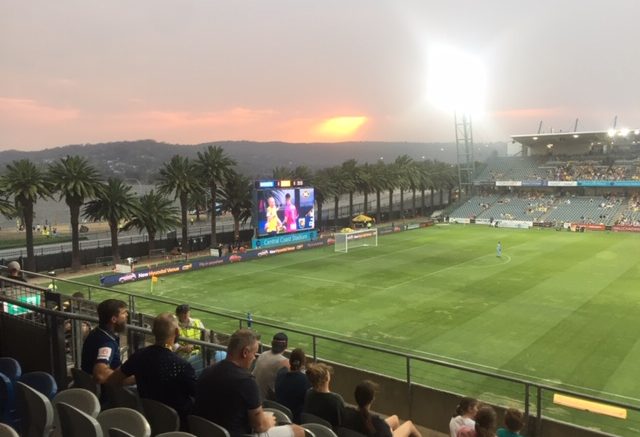 After a strong resumption to the 2020 NRL season in May, the Terrigal-based NZ Warriors have suffered a series of defeats, including a thrashing by the Sharks at Central Coast Stadium last Sunday, that leave them teetering near the bottom of the ladder.

The Central Coast Mariners also tightened their grip on the A-League wooden spoon last weekend with a 0-1 defeat to Perth Glory, also at the Stadium. The long and painful slide to the bottom for Central Coastbased teams playing in national competitions begs the question – is our wonderful Stadium cursed?

Warriors numbers thinning On Sunday (July 19), the Warriors recorded their first loss at Central Coast Stadium and have now posted three losses in their last four matches to be sitting in 13th place, along with the Cowboys, Bronco and Titans with only the hapless Bulldogs beneath them.

The Warriors were never able to get into stride in their match against the Sharks, who led 18-0 after just 15 minutes.

They were tormented for most of the match by former team-mate, Shaun Johnson, who showed his old club no mercy scoring a try, assisting in three others and kicking seven goals from eight attempts.

Coach Todd Payten had even more worries with three players – Wayde Egan, Jack Hetherington and Patrick Herbert – all taken from the field in the first half for HIA tests.

Egan returned to the pitch to score a late consolation try for the Warriors, but it was too little, too late.

The mounting injury list compounds the headcount woes for the Warriors, which gets even worse after this weekend’s match against the Roosters when wingers Ken Maumalo and David Fusitu’a, prop Agnatius Paasi and rookie forward King Vuniyayawa all fly back to New Zealand.

On Thursday (July 23) a frustrated Payten criticised other NRL teams for selfishness, claiming only four first-grade level players have been offered up for loan.

Mariners woes deepen In the A-League, the Central Coast Mariners also succumbed to the curse of the stadium with another excruciatingly narrow loss to Perth Glory.

A first-half goal from Glory’s Dane Ingham proved the difference despite a concerted push by the Mariners in the second half to score an equaliser, including a near miss from Jordan Murray who leapt into the air to contest an aerial ball before landed heavily and being stretchered from the field with a shoulder injury.

The loss cements the Mariners in last place with only a few matches remaining, including an F3 derby here in Gosford on Friday evening (July 24) against the Newcastle Jets. The Mariners have shown an uncanny knack this season of losing games despite seeming to dominate possession and create more scoring opportunities.

On a brighter note for the blue and yellow, former NZ international Michael McGlinchey and Brazilian import Jair both return for the Mariners this week along with Lewis Miller who is returning from injury, although Jordan Murray will not make an appearance this week due to his injured shoulder.