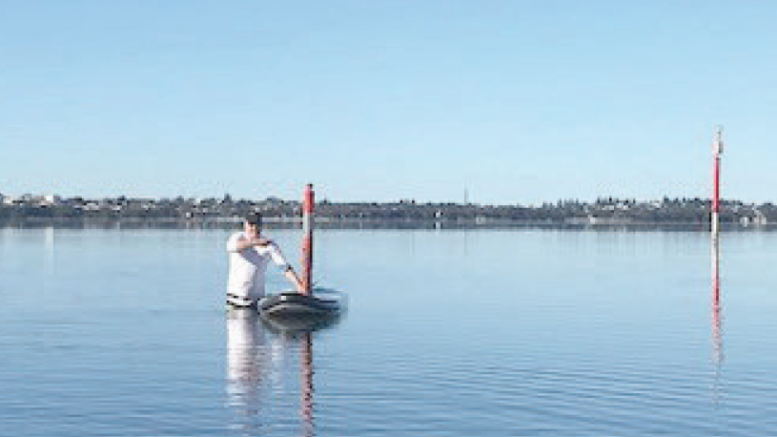 Safety issues have been raised over shallow waters, muddy siltation and sunken objects in the marked waterway channel from Ourimbah Creek into Tuggerah Lake.

Chittaway Point resident, Guy McKanna, says the channel has silted up to the point where it is less than half a metre deep. “Many boats are running aground going from the boat ramp up the creek and out into Tuggerah Lake,” he said.

“Locals are concerned that someone who doesn’t know this will go speeding out towards the lake, hit the sand or some object, have their boat grounded and go flying overboard.

“Again, Council is passing the buck, but they will not be able to pass the liability if there is an accident,” McKanna said.

He said the channel was normally about 2m deep. “If you put a tape measure down, you hit the weeds at about 60cm and then you’ve got another 15cm until hitting the muddy silt which is a good 15cm deep,” he said.

“There are no signs warning of shallow waters or sunken objects. “It’s a concern that someone new is going to come along and hit a tyre, a log, or some other junk and go overboard, and with it being school holidays, there’s kids out there.

“The floods in February brought a lot of junk down and deposited it there, such as tyres and logs, and every time it rains, the mud and silt comes down and just sits there and builds up because it can’t go anywhere.

“It would make sense, for safety reasons, for Council to come and clear the rubbish out, and the silt and mud, to once again have a clear deep channel,” McKanna said.

No response to inquiries was received from Council’s media unit, however, Cr Kyle MacGregor said he would formally raise the matter with staff and offered assistance and to represent affected residents as their ward councillor who took issues of public safety very seriously.

Cr Louise Greenaway also said that she would raise the matter with Council staff and no response to inquiries was received from Cr Chris Burke.

Council is responsible for location and building Performing Arts Centre

Little known about progress of vaccine rollout on Coast