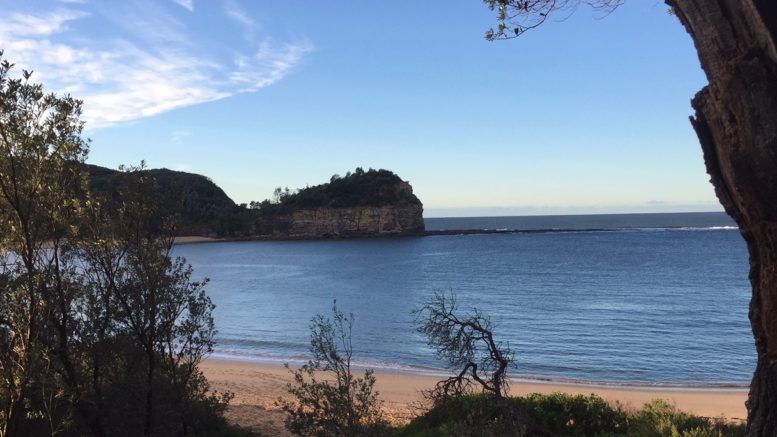 This year is the 122st anniversary of the wreck of the paddle steamer SS Maitland, in a small oceanic bay which now bears the name Maitland Bay.

The iron paddle steamer Maitland was built in 1870 and was 70 metres in length.

The Maitland was a regular trader along the east coast and Captain Skinner was experienced and familiar with how quickly a storm could develop to make the trip perilous.

It left Sydney at 11pm on May 5, 1898, with the view of arriving in Newcastle by 9am the following morning.

The ship encountered high seas and clipped the reef at Long Reef causing damage to a sponson and the hull and the ship was unstable and was taking in water.

Captain Skinner decided to make a break for the safety of Broken Bay using the lighthouse at Barrenjoey as a marker to aim for.

The ship’s engine room became swamped and the fires for the steam engine were put out.

Powerless, the ship drifted past the entrance to Broken Bay and was heading towards what was previously called Boat Harbour (now Maitland Bay).

Captain Skinner assembled everybody and instructed them “to prepare themselves for what was to come” and in the pre-dawn light the Maitland found itself crashing upon a rock shelf….

The SS Maitland set off from Sydney 121 years ago on May 5, bound for Newcastle, with 30 crew and 33 passengers on board. The paddle steamer never made it to Newcastle. It was beset by the worst gale in 20 years, later dubbed the Maitland Gale.

NSW history when the Maitland was pushed on to rocks at Bouddi Point and the vessel was smashed into two.

Historian Karen Askew relates the tragic story which took the lives of 29 people.

The ship was split into two pieces with the bow of the ship breaking off and sinking within minutes.

Crew and passengers in this section of the ship were almost immediately drowned by this action.

The stern of the ship was placed high and awkwardly on the rock shelf with the remaining survivors attempting to secure a line to a rock, trying to inch their way to land via the rope.

Only some small pieces of the ship remain to this day such as the ship’s bell at Maitland Bay Centre in Killcare and part of the ship’s boiler at Henry Kendall Cottage.

There is still one large piece of plate metal on the rock shelf which will no doubt rust away in coming years leaving only the place name as the only sign of this tragic episode in maritime history.

The Maitland Bay Shipwreck Track is a 3.9km return bushwalk through Bouddi National Park, down to Maitland Bay and remains of the SS Maitland at the eastern end.

Twenty-nine lives were lost on that stormy night with many bodies not recovered.

The recovery operation was performed by workers from Rock Davis’s shipyard in Blackwall.

Several of those that were recovered are buried in a small private cemetery on a plot of land in Booker Bay.

Some records note that seven of the Maitland victims, and other records note eight or nine, which reflects the state of the bodies that were recovered.

It is not widely known of the existence of the cemetery where some of the unfortunate victims are buried and its location is also beginning to be lost in time.

Previous to the Maitland’s accident only family members of the Bogans and Booker families had been interred there.

The cemetery itself was never approved by any local council as it pre-dates any form of local government and it was not officially consecrated by any recognised religious order.

With the victims of the Maitland are several of the Peninsula’s pioneer family members.

Because it was not an official cemetery, the records are scant,

and the last recorded burial was said to be in 1910.

Some say the Bogans are also buried there, but Mr Bogan died in 1917 so that puts into dispute what is the last recorded burial.

Interestingly, Mr Bogan is not showing on any of the records of the six recognised cemeteries in the district at that time, so he may well be in Booker Bay.

The Peninsula’s first settlers arrived in 1823.

James Webb was closely followed in 1825 by William and Betty Booker, and their 60-acre grant became known as Booker Bay.

The Bookers lived their lives on the grant and were buried on it in 1850 (William) and 1868 (Betty his second wife).

The land was then sold to William Bogan and his family.

After Mr Bogan’s death in 1917, the land was acquired by Rock Davis – the grandson of the same-named Rock Davis who led the recovery operation of the shipwrecked Maitland.

Mr Davis sold the portion containing the cemetery to the Church of England in 1924.

By 1956, all the lots had been sold off for residential purposes.

In 1980, a local newspaper article said eight victims of the Maitland shipwreck were buried on that land – “whose large, well- attended graves could be viewed until a few years ago”.

There was some campaigning in the 1990s for Council to buy back some of the land for a Memorial Park but that fell away to nothing and currently villas and a block of units are constructed on the site.

Land containing the cemetery is in present day Bogan Rd, close to the T intersection with Eastern Rd.

The only remnant signs of this cemetery are a pair of heritage- listed, tall Norfolk Island pine trees grown at what was once the gateway to the front entrance of the cemetery.

Henry Kendall Museum, in West Gosford, houses a piece of the paddle steamer Maitland’s boiler that was recovered and re- purposed as a water trough for cattle on the Bogan Farm before eventually being relocated to the museum.

For further reading there is the definitive book called “Wreck of the Maitland … a scene to make the angels weep” by local studies librarian Geoffrey Potter at Central Coast Council (2012).