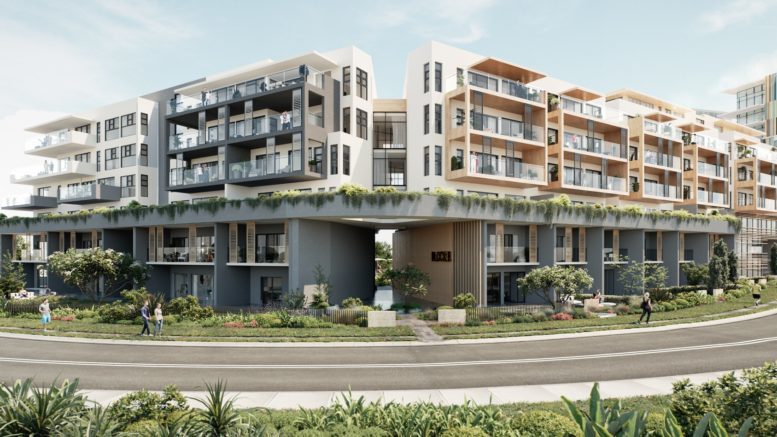 The proponent of a $110M residential project planned for 89 John Whiteway Dr, Gosford, has been asked to respond to submissions opposing the development as it progresses through the Department Planning for consideration as a State Significant Development.

Of 14 public submissions received, only one was in support of the project, with lengthy submissions from the Community Environment Network and the Friends of Gosford also opposing it.

The project would see the construction of four residential flat buildings ranging in height from 5 to 12 storeys, and housing 260 residential apartments on the eastern fringe of the Gosford City Centre.

But the bulk of respondents disagree.

Among major objections are height and floor space ratios exceeding planning guidelines, concerns over cliff stabilisation and noise during construction phases, traffic issues and loss of amenity in the area.

One respondent said the street flow of John Whiteway Dr. and Georgiana Terrace is of concern as the traffic’s only entry and exit access to Henry Parry Dr and Donnison St is via these already constricted streets.

He said the construction noise generated by the development works required consideration and questioned what professional consultation has taken place regarding the stabilisation of the southern boundary cliff face during earthworks, ongoing construction and for the many years of natural erosion ahead.

He described the narrowness and current traffic volumes in the area as a major accident just waiting to happen.

The respondent also said any visible interruption to the natural tree-sky outline was “environmental vandalism” and would set a dangerous precedent.

Traffic and parking issues were highlighted by a number of respondents, with one submission raising concerns over fire safety given the single road access and egress.

Privacy and noise issues also featured prominently in objections as did possible implications on an adjoining nature reserve containing a wide variety of native fauna and flora.

Concerns over a proposed public walkway and viewing platforms included the necessary removal of trees and the potential for security and privacy risks for nearby residents.

The Friends of Gosford said the steep site was not suitable for pedestrian access.

“From a planning perspective the placement of 260 units in an isolated location is not a good example of high-density residential development,” the group’s submission said.

“High-density residential development should have easy, accessible pedestrian access to both public transport and shops.”

The one submission in support of the project said the landscape plan, walk-through paths and look-out would be welcome.

“Getting rid of the old quarry will be a great pleasure; it is full of weeds, vermin and dust,” the submission said.

It said the development could also lead to completion of street lights, pavements and kerb and guttering in John Whiteway Dr.

“The buildings are attractive and the bulk and scale from John Whiteway Dr has very sympathetic gaps and light channels,” the submission said.