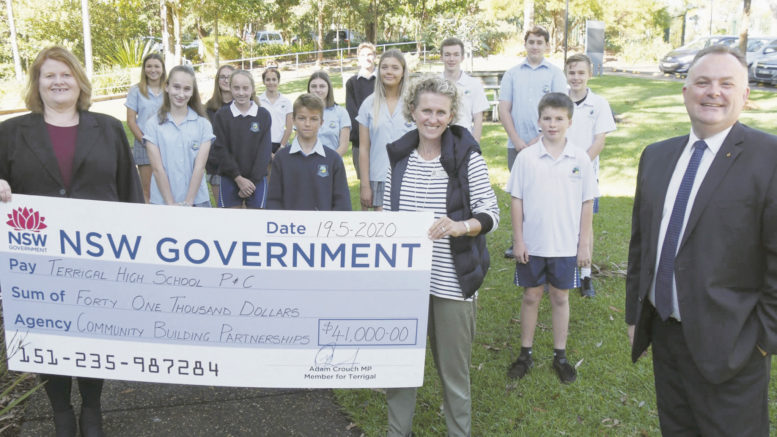 Adam Crouch delivering the cheques across his electorate

Parliamentary Secretary for the Central Coast and Member for Terrigal, Adam Crouch, toured several of the Coast’s schools in recent weeks armed with a loaded check book.

Bensville’s Coast Christian School was the first to receive a visit from Crouch, who provided a $30,000 cheque for the construction of new shade coverings at the school’s kiss ‘n’ drop zone and new soft fall at the playground.

A spokesperson for the Empire Bay Parents & Citizens said the inspiration for the tiered outdoor seating came from the students.

“Their presentation at our P&C meeting on their primary research into preferred lunch time activities and equipment to enhance their school experience was the driving factor of our grant application.

“The idea of the mobile library box is to encourage students that like to read to venture outside to enjoy this activity rather than being inside during their lunch times.

Brisbania Public School was the next recipient receiving $17,860 for new electronic signage.

In a second outing Holgate Public School welcomed the receipt of $41,378 to put towards the installation of shade sails on the playground.

Holgate PS Principal, Vanessa Gordon, extended her thanks to Crouch and the NSW Government for the funding and said the new shade sails would support the school’s safe play policy by extending the availability of sun-safe areas.

Crouch then stopped in at Terrigal High School to deliver a cheque for $41,000 to its Parents and Citizens Association for outdoor fitness activity stations at the school before moving on to nearby Terrigal Public School with a $29,000 cheque.

Principal, Michael Burgess, said the funding would be put towards a larger restoration of the school’s playground.

“We had demountables removed from the site and we’re now planning to get the oval patched up and back to an even, playable surface.

“We’re still at the planning phase, but once the tenders are sorted, we’re hoping to have the project completed before the year’s end,” Burgess said.

“Terrigal United FC and Terrigal-Matcham Cricket Club use the oval from time to time, so this project really is a boon for the local community,” he added.

Crouch ended his tour at Aspect Central Coast School’s main campus at Terrigal, where he delivered a $10,000 cheque for the installation of a new PA system.

All up $189,238 in funds was delivered from monies allocated under the NSW Government’s Community Building Partnerships scheme.

This follows another $108,262 delivered to community organisations around the Coast as reported in previous editions.

Funds received for new clinical and education space at Nunyara