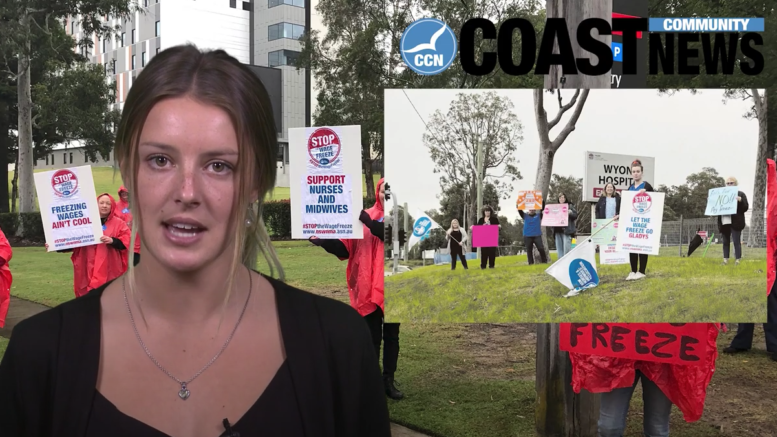 Well, the restrictions of travel in NSW have been lifted and local food and beveridge establishments are now able to accommodate up to 50 patrons.

As a result, the Coast is bracing for a surge of Sydney-siders with isolation fever arriving this evening for the long weekend.

Coast news understand many of the regions pubs, clubs and restaurants are heavily booked.

Nurses have hailed the blocking of a bill in the Upper House on Tuesday seeking to freeze NSW public servant wages.

The failed vote follows widespread protests with Central Coast health workers leading the charge outside of Gosford and Wyong hospitals over the past two weeks.

Local Greens member of the Upper House, Abagail Boyd, spoke against the bill to freeze wages and we spoke to her earlier today.

NSW Treasurer, Dominic Perrottet was unapologetic however, saying it was more important to save existing jobs than to grant pay rises at the current time.

He has now referred the case to the Industrial Relations Commission.

Central Coast Councillors will be asked to endorse a 488-space, multi-storey car park on the western side of Central Coast Stadium at their upcoming meeting on June 9.

The stadium was chosen as the most preferred site out of three, but means the open grass playing area, currently used by children and their families on game day would be lost.

I’m sure that’s one agenda item that will be heavily debated on Tuesday night.

And work on Leagues Club Fields is in full swing. David Abrahams followed up on progress this week.

Thanks Jacinta, yes work has been underway for well over a month now and, from all reports, has involved a very high level of employment for local tradies.

The $10M project, led by Landscape Solutions, will see the fields redeveloped into parklands that celebrate the areas indigenous heritage and local artists from the Darkinjung Aboriginal Land Council have played a key role in the design.

While we were down there, we ran into Adam Crouch on the tools as it were.

In other news, a behavioural change survey by the NBN Co released this week showed that over 80% of respondents said that working from home had positively impacted the way they manage their work-life balance while two-thirds of all respondents said they expect to work from home more after the Covid-19 crisis ends.

NSW Business Chamber Director for the Coast, Paula Martin, attributed much of this to less commuting time, less stress and less workplace distraction.

And while we’re on the subject of the NBNCo, the national telco has announced it will turn on gigabit connections to parts of the Central Coast from next year, but there is a catch – it will only be available to customers with existing fibre-to-the-premise connections.

For everyone else, the NBNCo will continue to rollout more copper wire under its Fibre to the Curb strategy, something that has been heavily criticised by telecommunication experts.

And finally Ross, a project that started out as just a bit of fun has turned into an amazing story of creativity and a whole new genre of art.

Pete Rush of Wamberal is the local artist behind many of the amazing driftwood sculptures that have appeared along Central Coast beaches, including this wonderful woolly mammoth at Cockrone Lagoon.

Pete was also the creator of the famous Anzac war horse, the Skillion pelican, the Avoca giraffe and this emu that also lit up Avoca beach against the morning sunrise.

Pete said that to prevent crowds gathering on the beaches to watch him work during the shutdown period, he created most of his sculptures during the middle of the night.

Back to you Jacinta.

In sport, the NZ Warriors have made an impressive restart to the 2020 NRL season with a near-flawless 18-0 win over the Dragons at Central Coast Stadium last weekend.

The Warriors completed 44 consecutive sets up until the final 5 minutes of the game, a new record for the NRL.

In other sports news, the Central Coast Bicycle Users group has celebrated the easing of restrictions by launching a new event for the region, the Tour de Central Coast.

The tour will take place in 10 stages, beginning on June 1 with a 25km ride from Woy Woy to Gosford and the group is encouraging cyclist of all ages and abilities to join the tour.

And in weather, the first week of winter gave us rain and dangerous surf conditions with many Central Coast beaches badly eroded from the swell.

The weather since has died down and today’s top temperature was 19 degrees after a 9 degree start.

Saturday will see a full moon and looks likely to be as sunny as today, with a crisp 10 degree start and a top of 20 degrees.

Sunday will see a change to a wetter day with a 70% chance of rain across the Coast with light south-westly winds.

The Queen’s birthday Monday is likely to see more rain with a maximum of 17 degrees after night time lows of 4 to 7 degrees.

And there’s no shortage of big events this weekend, Covid-19 notwithstanding.

On Sunday afternoon, of course, Coast opera Australia will perform and Afternoon with Coast Opera from Disney to Diva.

Featuring acclaimed Soprana Angela Brewer and a long list of operatic stars, the event will be boomed out of Central Coast Stadium as well as being livestreamed on the Coast opera Australia website as well as our very own website here at Central Coast Newspapers.

That event starts at 4pm this Sunday.

It’s all happening up on the mountain as well. This week, the Walkabout Park re-opened and Alex Herget took the opportunity this week to speak with Tassin Barnard.

And, still on the mountain, the annual Harvest festival begins once again this week but this year, it will be in a new online format.

And we’ll leave you today with a small preview of mountain life beyond the farm gate.

For all our readers in the north, we hope you like our new look Coast Community Chronicle. Formerly the Wyong Regional Chronicle, the paper still has all the local news but is now available at over 200 distribution points in the north weekly and Issue 191 was out, hot off the press on Wednesday.

See you next week