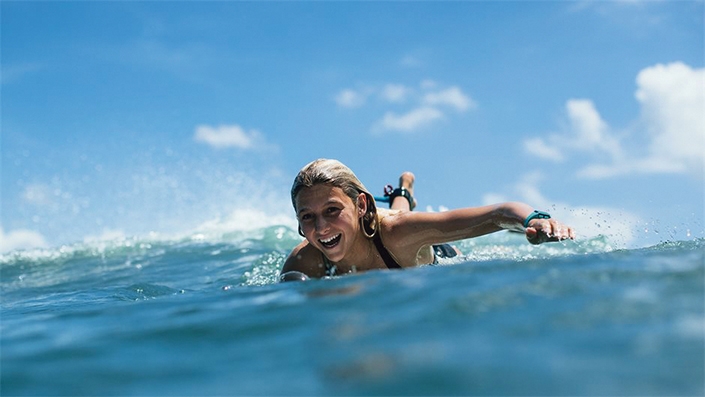 North Shelly’s Molly Picklum was crowned Female Rising Star of the Year, with her coach, Glenn Hall, taking out Coach of the Year.

The awards were held digitally for the first time, with surf media icons, Ronnie and Vaughan Blakey, tasked with hosting duties and to celebrate this year’s winners.

Molly Picklum was the name on everyone’s lips in 2019 and the Rising Star has continued to turn heads in 2020.

Picklum won five events to become the WSL Australia/Oceania Junior Qualifying Series Champion, and her star has only risen since then, after a 9th place finish at her debut WSL Junior Championships.

She kicked off 2020 with strong performances in the Sydney Surf Pro, the Doyle Partners’ Women’s Pro and the Australian Boardriders’ Battle, representing her home team of North Shelly, all while balancing her budding career with training and high school.

On the cusp of the big leagues, Picklum was earmarked for the Rising Star Award by the surfing community.

In making her acceptance speech, Picklum thanked her family for their unwavering support, particularly her mum, for keeping her grounded with everyday tasks like homework and feeding the dog.

She also paid tribute to Hall as her coach, and her sponsors for helping propel her forward in a tough industry.

A celebrated veteran, Glenn ‘Micro’ Hall grew up surfing at Umina, and spent his youth trying to break into the World Surf League’s (WSL) Championship Tour.

At 31, he did just that, but his rookie year was dealt a serious blow when he injured his back during Round 12 of the 2013 Tour season.

After a year off the tour, Hall clawed his way back into the 2015 season before retiring at the season’s end.

Having been given the incredibly rare opportunity to enter the Australian Institute of Sport’s surfing program as a 16-year-old, Hall quickly cottoned on to the difference that a good coach can make and that stuck with him throughout his career and into retirement.

It’s also what inspired him to start his own surf school, Micro Surf Academy.

Hall’s since become a bit of a super coach in the WSL, and has helped big names like Matt Wilkinson, Owen Wright, Tyler Wright and Ace Buchan make waves over the years.

He’s also giving back to the Coast with his development team, which includes Picklum and other up and coming local talents like Lennox Chell and Caleb Tancred.

In his acceptance speech, Hall thanked Surfing Australia for the honour and paid tribute to the other coaches doing great things with Australian talent.

The 2020 Australian Surfing Awards can be viewed on the MySURF website.