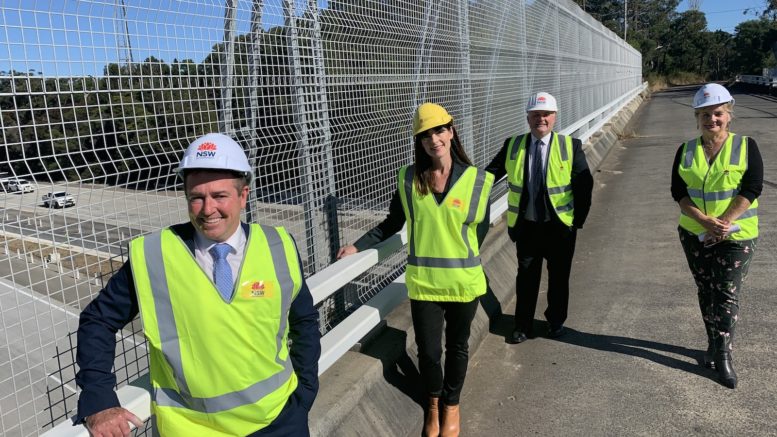 [Kariong] The second of three major upgrades to the M1 designed to improve journeys on one of Australia’s busiest roads is now complete, with the Kariong to Somersby upgrade opened to traffic today, Thursday May 28.

Deputy Prime Minister and Minister for Infrastructure, Transport and Regional Development Michael McCormack said once completed, this project will benefit the more than 70,000 motorists who use the M1 every day.

“The M1 Pacific Motorway is a crucial link for freight travelling between Sydney and Brisbane, which is one of the busiest transport routes in Australia,” Mr McCormack said.

“This important project is part of the Federal Liberal and Nationals Government’s record $100 billion infrastructure pipeline which is laying the foundations for recovery on the other side of the COVID-19 pandemic.”

Minister for Regional Transport and Roads Paul Toole said widening the M1 to provide three lanes in each direction would reduce queuing and improve travel times and drive a boost to productivity on one of NSW’s most important freight corridors.

“Not only will this be welcomed by local communities, but freight operators will also reap the rewards of a more efficient corridor,” Mr Toole said.

“We are now in the final stretch, with only the Tuggerah to Doyalson section remaining. With that project nearing completion, we’re going to see a completely revitalised M1.”

Federal Member for Robertson Lucy Wicks said the completion of this section means the entire M1 upgrade project is now on the home stretch.

“Widening the motorway has multiple benefits including increased traffic capacity on the motorway and at Kariong interchange, which will result in fewer delays and improved travel times,” Mrs Wicks said.

Parliamentary Secretary for the Central Coast and Member for Terrigal Adam Crouch said the upgrade would cater for future traffic increases as a result of growth in the Central Coast, Hunter and North Coast regions.

“The Central Coast will be home to 95,250 additional people between 2016 and 2041, which is why the delivery of more infrastructure is so important for our community,” Mr Crouch said.

“All local residents who drive to and from Sydney can be assured their trip is becoming smoother, safer and faster thanks to this $391.6 million investment.”

The M1 upgrades are expected to be fully opened to traffic at 110 km/h by mid-2020, weather permitting.

The $391.6 million M1 Productivity Package is jointly funded by both the Australian and New South Wales Governments. The Australian Government is providing $195.8 million towards the planning and construction of the package.