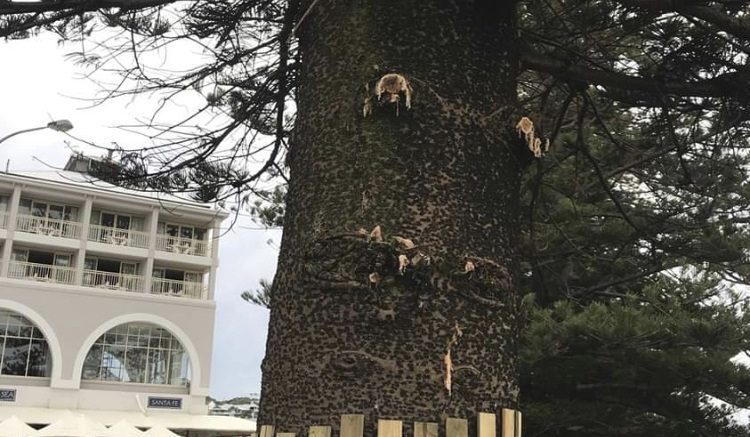 A Southern Norfolk Pine on The Esplanade at Terrigal has been pruned to prevent damage during the construction of the new boardwalk.

[Terrigal] The mystery of the severe lopping of branches from a State Significant Norfolk Pine at the southern end of The Esplanade at Terrigal has been solved.

Concerns were raised on April 20 by community activist, Joy Cooper, that apparently healthy branches had been cut from the tree, which is listed on the Significant Tree register.

But Central Coast Council has confirmed the tree was pruned to avoid damage to it during the construction of the Terrigal boardwalk, which is now underway.

A Council spokesperson said the pruning of the Norfolk Pine was undertaken by Council arborists in accordance with the Australian Standard for Protection of Trees on Development Sites including trees shown on the Significant Tree Register.

“Council removed some trees and vegetation where the Terrigal Boardwalk is planned to start to allow the contractor with a safe access to the site,” the spokesperson said.

“While this was not part of the final proposed works, the vegetation will be replaced, and the embankment remediated once the works have (been) completed.

Cooper also raised concerns that the health of workers and the general public could be at risk due to “numerous pieces of asbestos found regularly on The Haven Beach” and that appropriate siltation barriers were not in place.

The Council spokesperson said the relevant project teams were aware of the asbestos issue.

“There are suitable measures in place to ensure the (safety of) project teams and the general public,” the spokesperson said.

“To date, there has been no evidence of asbestos on site.”

The spokesperson also confirmed that the contractor would install silt fencing around all outer edges of the access ramp.

“The contractor is aware of the environmental considerations and our site team will ensure best practice,” the spokesperson said.

Construction works on the boardwalk are expected to be complete by the end of 2020, with public access to follow early in January, 2021, unless impacted by weather events, COVIC-19 or other unforeseen events.

During construction, access to the area around the footprint of the boardwalk and rockpool will be restricted, plus a small section of the Terrigal Haven carpark will be closed.

The $5.8M boardwalk project is being funded through a $2.9M Restart NSW Regional Growth Environment and Tourism Fund grant, which was matched by Council through its yearly capital works budget.