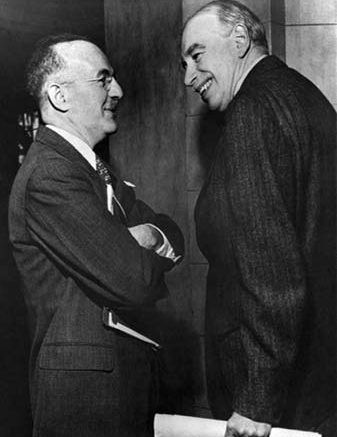 In the aftermath of the Great Crash of 1929, the Hoover administration did nothing.

Not only was neo-Classical economics so confoundingly mathematical, but the laissez-faire economy was purportedly self-correcting and so its key prescription for authorities was, in fact, to do nothing.

The laissez-faire economy in depression was like a beached ship waiting for the tide to come back in or, for the more pious, a penance for past acts of greed.

But in the years following the 1929 crash, there was no such bounce and no such recovery.

By 1932, production had fallen virtually in half, one-third of all personal and corporate wealth had evaporated, and unemployment was fast approaching one in five workers and rising.

Penance of this scale and duration had not been suffered before.

By this time, several leading economists had broken from neo-Classical orthodoxy to argue that the boom-and-bust pattern of growth was not some unalterable pulse of capitalism and that the government could, and should, focus on the problem of economic instability, as opposed to inequity.

Irving Fisher, for instance, posited a trade-off between inflation and unemployment, later developed by Bill Phillips (as the “Phillips Curve”).

Fisher adhered to the prevailing belief that markets would tend toward full employment under conditions of competition.

But his English contemporary, John Maynard Keynes, had a different view, a view  shaped by his participation on behalf of the British Treasury in the Treaty of Versailles and reflected in his scathing post-mortem, The Economic Consequences of the Peace.

Keynes’ had come to believe that a free-market economy did not necessarily generate full employment and that booms and busts were, in fact, a product of economic mismanagement.

Keynes theory was not really a different theory, but rather a re-casting of the prevailing neo-Classical Theory.

Keynes had been educated in neo-Classical Theory by its most accomplished masters, Alfred E. Marshall and Arthur C. Pigou, and even taught it for many years at Cambridge.

He saw no problem with the super-structure of Classical Theory or its core premise of diminishing returns – he simply believed it contained several basic errors.

He argued the assertion that markets tended to equilibrium at full employment was just a special case within his more general theory, “The General Theory of Interest, Employment and Money.”

The main premise of Classical Theory that Keynes objected to was Say’s Law that supply always created its own demand.

The disequilibrium caused by a rise in savings, they argued, would cause interest rates to fall, encouraging stronger future consumption and investment and, in turn, restoring full employment.

Keynes argued this was an optical illusion.

Since income could either be spent or saved, and since current income could only be generated by spending on either consumer goods or new capital goods, by definition, savings must at all times be equal to investment.

To argue otherwise he said “supposed a depositor and his bank can somehow contrive between them to perform an operation by which savings disappear from the system.”

While the volume of savings and investment must be equal, Keynes argued the driving forces for each were quite different.

The level of savings would rise or fall linked to growth in income and the propensity for people to save more as their income rose.

But more of the world’s savings were now being channeled into major financial centres, where it could either be held as cash or allocated by professional managers to shares, bonds, or to new plant and equipment.

New productive capital formation therefore, depended on its expected return relative to the prevailing complex of interest rates of different maturities and risk.

And depending on how it was allocated, argued Keynes, savings and investment could be equal at interest rates well above the level consistent with full employment of the workforce.

A pivotal aspect of Keynes’ thesis was that it contained the first real contemplation of expectations in investment decisions.

He defined the marginal efficiency of capital (for physical equipment and securities alike) as the rate of return which discounted all expected future cash flows to their current replacement cost.

Importantly, Keynes depicted the process by which people formed expectations was largely by extrapolating current conditions.

“It would be very foolish, in forming our expectations, to attach great weight to matters which are uncommon.  It is reasonable therefore to be guided to a considerable degree by the facts about which we feel confident, even though they may be less relevant to the issue than other facts about which our knowledge is vague and scanty. For this reason the facts of the existing situation enter disproportionately into the formation of our long-term expectations; our usual practice being to take the current situation and project it into the future.”

This aspect became a key point of attack on Keynesianism in the 1970s but it is worth noting here that it was in this context that Keynes gave us his “beauty contest” analogy in which he distinguishes productive investment based on long-term expectations of fundamental demand, from speculative investment, premised on shorter-term readings of crowd psychology.

In explaining why the 1929 Crash and the Depression were more severe in America, Keynes lamented that the art of forecasting in the United States had become too focused on short-term market psychology:

“When the capital development of a country becomes a byproduct of the activities of a casino, the job is likely to be ill-done. The measure of success obtained by Wall Street, regarded as an institution of which the proper social purpose is to direct new investment into the most profitable channels in terms of future yield, cannot be claimed as one of the outstanding triumphs of laissez-faire capitalism – which is not surprising if I am right in thinking the best brains of Wall Street have in fact been directed toward a different object.”

The final key ingredient to Keynes’ framework was the supply of money.

The supply of money, on the other hand, was largely set by monetary authorities and, in the days of the gold standard, tied to gold.

And therein lays a central explanation by Keynes for the high unemployment of the 1930s.

Due to the strictures of the gold standard, money was too tight and the market-clearing rate of interest too high to encourage enough new private investment to support full employment.

Keynes offered further explanations for the severity of the Depression.

Firstly, the sheer magnitude of new investment during the late 1920’s meant each new dollar of capital formation began to suffer rapidly diminishing returns from mid-1929, right at the time interest rates were finally being raised (he argued authorities would have been better served lowering rates at this late stage of the boom).

This was compounded by heavy depreciation charges and sinking funds that deflated profits in the early 1930’s.  Given his belief that businesses extrapolated current conditions, he called this a “crisis of confidence”.

This crisis of confidence could only be reversed, according to Keynes, by a jump-start via government spending.

With low confidence, monetary stimulus alone might not fuel new investment, even at very low interest rates.  Only a direct jolt in the form of new public works would be effective.

Such investment, he argued, would have a knock-on effect throughout the economy as the income so earned was re-spent, in turn, creating more demand to inspire a new round of private investment.

Keynes referred to this phenomenon as the “multiplier” effect.

By the time Keynes’ published the General Theory in 1936 it was no longer a radical treatise but a more formal, academic justification of the Roosevelt Administration’s New Deal.

In a trip to the United States shortly after Roosevelt’s inauguration, Keynes met with the President to reinforce the case for concerted fiscal stimulus to “prime the pump” of economic recovery, explaining in some detail the deeper second- and third-round multiplier effects.

Roosevelt is said to have later talked of liking Keynes but not understanding much of what he said.

No matter, for by now disciples of Keynes had sprung up everywhere, infiltrating Washington and the halls of Treasury.

The rise of Keynesian Law and a ramp-up in military spending from the late 1930s eventually restored growth to the United States.

It also inevitably brought Keynes back into the world of foreign diplomacy.

Well before the end of the War, debate had shifted to post-war economic policy.

What would happen when the war ended and spending stopped?

The spectre of a renewed rise in unemployment loomed large.

Truman was also adamant the Allies must not repeat the mistakes of the Entente in 1919.

The failure at Versailles, so well pre-empted by Keynes, meant it was natural for him to play a role in developing the blueprint for a more sustainable peace.

Initially, Keynes participated in a series of missions in the early 1940s by British Treasury officials to Washington seeking war loans and military support.

The negotiations were highly charged and often unfruitful.  The Americans were still bound by their doctrine of isolationism and were unwilling to help defeat one Old European power just to restore the dominance of another.

From Keynes perspective, Britain had been forced off the gold standard by American protectionism.

And could not the American’s see that Hitler would not hesitate to cross the Atlantic once he had defeated Britain?  It was during this time that Americans established a love-hate relationship with the barbed, but silkily eloquent Englishman.  The American people loved his celebrity, but his disdainful discourse with negotiators won him few real friends in Washington.