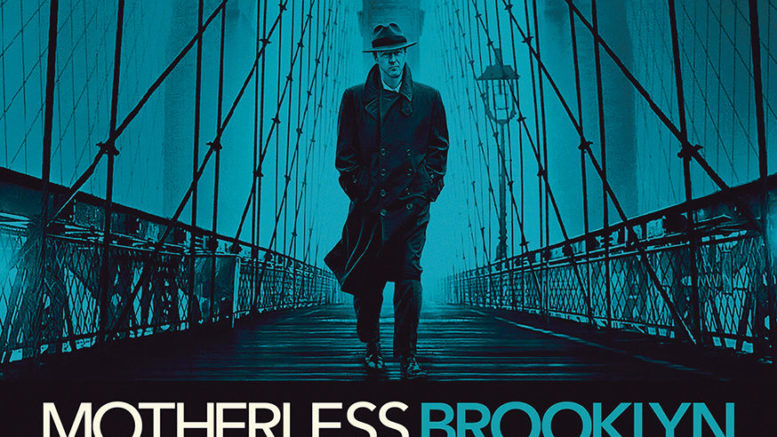 Late last year we brought you a book review of Motherless Brooklyn courtesy of our Reluctant Book Critic, Kim Reardon.

As foreshadowed in her review, the movie has been picked up by Edward Norton and made into a major motion picture and has now arrived at screens in Australia.
The first thing I should say is that readers of the book may find the movie puzzling in the extent of its creative deviation.
It is, of course, a film-makers prerogative to choose his or her setting and create their own art.
But it’s not these changes Norton makes, so much as the poor casting and direction that makes this film a big fail in my humble view.
Unlike the book, which is set in Brooklyn 1999, the movie has been recast to the 1950s.
Lionel Essrog (Norton) works for a second-rate detective agency owned by Frank Minna (Bruce Willis), a mobster who took in Lionel as an orphan along with his cohorts Tony, Danny and Gilbert, who call themselves the Minna Men.
Lionel has Tourette’s syndrome with physical and verbal tics and is known affectionately by the others as “Freakshow”.
When Minna is gunned down by a group of mobsters, Lionel sets himself on a personal crusade to find his killer and avenge Minna’s death.
Lionel takes us on a journey around the seedy nightclubs of Harlem and the slums of Brooklyn in his quest to find Frank’s killer.
We meet a colourful cast of characters, from mobster thugs, to scary albeit endearing jazz bands, to anti-development activists and ultimately to the city’s powerful and corrupt municipal authority, Moses Randolph (Alec Baldwin).
We get inside Lionel’s mind and see how his Tourette’s affects every interaction he has, especially when he gets nervous or is in the company of women.
His invisible friend Bailey bears the brunt of Lionel’s outbursts.
But part of Lionel’s condition is a photographic memory and it is this that allows him to piece together the clues to Frank’s murder.
It is not just the setting that Norton has radically changed from the book – it is also the nature of Lionel’s character.
He is less the deeply flawed, bumbling apprentice gumshoe from the book and more a street-smart, earnest (bordering on righteous) super-sleuth.
Norton also tries to keep the serious social issues associated with the redevelopment of the Brooklyn slums centre-stage, but it causes the movie to drift away for long periods from the humorous meanderings and antics of Lionel.
It is this and some jarringly unrealistic scenes, compounded by some pretty bad over-acting by Laura Rose (Gugu Mbatha-Raw) that repeatedly lift the viewer out of the story and prevents any real tension from building.
Notwithstanding his wonderful portrayal of the young, stuttering Aaron Stampler all those years ago in ‘Primal Fear’ (1996), Norton’s portrayal of Lionel’s Tourettes is unconvincing.
There is even something a little self-indulgent in Norton’s decision to cast himself as Lionel – he’s too old and too well-known to bring Lionel’s character alive.
In fact, with the exception of the cameo performance from Bruce Willis (who never fails to light up a film), there is not much positive to say about any of the performances.
I think we’re tired of seeing the mean, corrupt antagonist once again being played by Alec Baldwin, whose performance is stilted and one-dimensional.
And while it pains me to say it, even the great Willem Dafoe doesn’t cover himself with glory here – but perhaps Norton’s blunder of casting of a short, thin, red-bearded German (who is clearly a decade older than Baldwin’s character) as the younger, brother of the tall, well-fed, dark-haired Randolph that’s too blame.
There are some positives: Moments of cinematography magic by Dick Pope, superb jazz (I almost wanted to forget the movie and just listen to the soundtrack), some elegant street-front set design by Kara Zeigon and some nostalgic 1950s fashion statements featuring hats-and-trench coats (was it Norton’s desire to dress up that drove his decision to set it in the 1950s?).
I thought perhaps this might find much greater appreciation from New Yorkers than a dopey Aussie, but I note that even the New York Times also struggled to find anything good to say about this film.
Unless you’re big Edward Norton fan (or a die-hard Bruce Willis fan), probably one to miss.