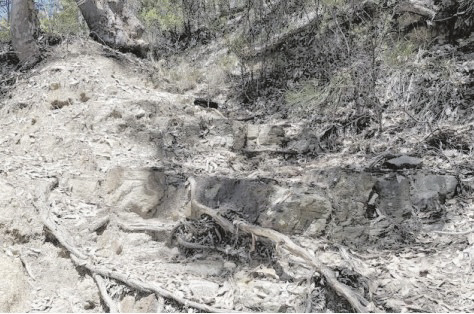 Car parking in Hardys Bay, poorly maintained parks and walking tracks in Bouddi National Park are among the current interests of the Wagstaffe-Killcare Community Association.

President Mr Mike Allsop said the association had several things on its agenda at present.

There was a focus on traffic and parking arrangements surrounding the commercial area and Hardys Bay waterfront,

“The parking in Hardys Bay is a real issue because along the waterfront the roadway is very poorly defined with rough edges and sandstone blocks limiting parking space,” he said.

“We’ve asked Council to come out and have a look and follow through on a previous statement that they would find a traffic and parking solution.”

Mr Allsop said he was hoping a postponed meeting with Council would be reconvened soon to discuss maintenance of parklands.

“There are small community parks, play areas and picnic areas, waterfront and so on, very poorly maintained,” he said.

“The levels are all over the place and, even as I look at them today, they’re full of mud. The grass isn’t consistent.

“They really need to be re-topped, re-turfed, drained appropriately, and just cleaned up.

“It’s not a big job but we’d like some attention.

“We’ve got a community that likes to see things in good order and we understand that it’s a big local government area, and the Council demands are over a huge area, but we’d just like our little share of it to keep things under control,” Mr Allsop said.

Association members are keenly awaiting the release of the Bouddi National Park Plan of Management to see if their suggestions to upgrade paths, particularly the Half Tide Rocks track, have been taken on board.

National Parks and Wildlife Service manager Mr Andrew Growcock said the plan had undergone all the Parks statutory requirements, including reviewing the plan against the submissions, and would now be passed on to Environment Minister Mr Matt Kean for consideration of adoption.

“One of our points was that while the plan itself was interesting from an ecological point of view, it had absolutely nothing to do with bodies of work,” Mr Allsop said.

“The whole community access part of the National Parks work was very poorly addressed in the plan and we’d just like to see some works progressed.

“Half Tide Rocks path was one of the first because we’ve been pushing for this for about four years and it’s just degraded disgracefully – and there’s others we’d like to see upgraded,” Mr Allsop said.

Meanwhile, plans are progressing to establish the Community Resilience Plan with the objective to disseminate clear and concise information to people and to co-ordinate the community response to disaster events.

“With the two emergency services and two great community organisations all acting as one, you can be assured that whatever happens, we’ll be in a much better place to cope as a community,” Mr Allsop said.