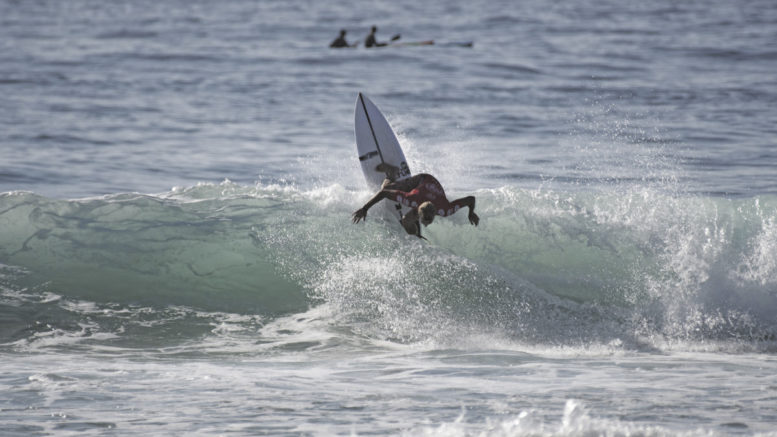 Avoca Beach played host to elite surfers from around the world at the Vissla and Sisstrevolution Central Coast Pro, a World Surf League (WSL) qualifying event, from February 25-28.

The Avoca surf produced a four to six feet surf and several exciting contests.
International stars included Kirra Pinkerton from the USA, Brisa Hennessy from Costa Rica and Daniella Rosa from Peru in the women’s competition, pitting their skills against local stars like Cedar Leigh-Jones (Avalon).
Pinkerton showed why she was a former World Junior Champion and notched up a variety of near perfect scores in excess of nine-points to earn a place in the quarter-finals.
“I’m super excited to make finals day,” said Pinkerton.
“I kept looking for those lefts with the glassy faces that allow you to do one or two big turns.
“I noticed the rights were really fast, so I wanted waves that slowed down a little bit, which I think the lefts did.”
But it was South Africa’s Sarah Baum who took out the women’s final, producing the best rides when it counted.
In the men’s competition, Avoca’s Adrian ‘Ace’ Buchan and Port Macquarie’s, Matt Banting, also lined up against a strong field of local and international surfers.
Buchan showed the same skills that won him the event in its inaugural year in 2016.
The WSL World Championship Tour surfer used several backhand attacks to his advantage in the heats to get the edge over his opposition.
Buchan carried his fine form into the finals and came very close to taking out the tournament, winning his quarter final early in the day, selecting only two waves, but nailing them both with a combined score of 16.10.
He was subsequently defeated by Port Macquarie’s, Matt Banting, in the semi, who then went on the clinch the final.
“It feels awesome to be surfing an event on home surf and I think it gives me a bit more motivation to compete,” said Buchan.
“It was awesome to see everyone turn up earlier in the week and see all the different competitors from different countries surfing here at Avoca,” Buchan said.