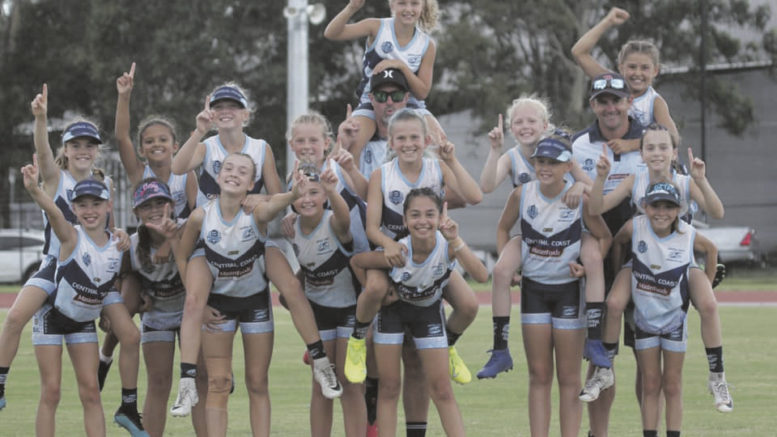 Central Coast Oztag has continued its dominance of the Australian representative Oztag scene, claiming the overall Club Championship, following the completion of the NSW Junior State Cup on February 23.

While the Under 12s-17s NSW State Cup was interrupted by inclement weather earlier in February, the Under 9s-U11s tournament was played in far drier conditions, with Central Coast Oztag adding more silverware to its trophy cabinet, winning the Girls 11s division for the second year in a row.

The club’s 9s, 10s Boys and 11s Boys also put on a show, all making it to their respective semi-finals, with the 10s Girls just narrowly losing out in their quarter final. Speaking to Oztag Australia, Central Coast Oztag Director, Dale Berg, said the club had been going from strength to strength, with some exceptional junior teams at the forefront of that success.

“Our 15s Girls have won their last three tournaments in a row, including Nationals.
“They’ve probably been the standout team over the past 18 months and they’re all looking towards Australian selection later this year.
“We’d expect to have five or six of those girls as strong contenders to make those teams.

“Our 16’s Girls have gone back to back from Nationals into the State Cup, and they’ve come a long way in the past 12 months and have gone from scraping into the finals at most tournaments to winning two in a row.
“Our 14s Boys also won their first State Cup and are another side that has improved immensely over the past year.

“Then our 11s Girls won their State Cup.
“They’ve been quite a strong team since the Under 9s, and the coach there has done a great job in getting as many girls to trial for the side as possible,” Berg said.
Berg put Central Coast Oztag’s recent success down to the strength of the game across the region and to the quality of coaches involved in the Central Coast set-up.

“We’re lucky that we’ve set up competitions in some really good areas where we draw strong players from league clubs up and down the Coast.
“We’ve also had huge growth in the number of girls playing Oztag in the last two to three years and I think when you look at our results, our girls have been particularly strong.
“In the last few years, we’ve tried to get as many of our representative players in to coach our girls’ teams as possible, and that has made a real difference.

“The skill level is going up year on year, and I think that improvement and growth is only going to continue on the Central Coast,” he said.
While Berg admitted that the ending to the NSW Junior State Cup in Coffs Harbour wasn’t ideal, he said the Club Championship was a testament to the consistency of his sides across all divisions.

“All the teams probably would have preferred to win in a grand final, but they couldn’t control that, and fortunately they got themselves in a strong position early in the tournament.
“We only had one team out of our 18 teams at Coffs Harbour who didn’t qualify for the finals, and from those sides, I think we only had two teams who weren’t ranked in the top four of their respective divisions.
“The shorter games weren’t ideal, but fortunately our sides were able to make good decisions when it mattered and that really helps when you’re only playing 8.5 minute halves,” he said.

Berg also seemed confident that Central Coast Oztag would continue their strong form at the NSW Senior State Cup in March.
“We have a lot of girls who will be playing in our 20s Girls side who played in the Junior State Cup as well, so it’s exciting to see the younger players push through into the senior ranks.

“Our Men’s sides are also going through a bit of a transitional period and I think we’ll have a lot of the 16s and 18s Boys push through into the seniors in the next few years as well.
“We’ve got four players from the 17s Boys side last year playing in our Men’s Opens side at Senior State Cup this year, so it’s exciting times ahead,” Berg said.

Local Oztag team one of the top teams in NSW