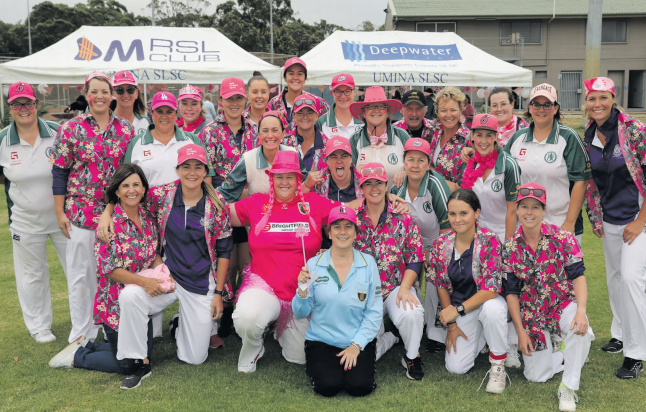 The weekend of January 11 and 12 saw the resumption of the Central Coast Cricket Association’s (CCCA) Women’s T20 competition after the Christmas break, with the inaugural Pink Stumps Day, hosted by Southern Spirit Women’s side to raise money for the McGrath Foundation.

There were plenty of off-field activities for spectators, including the VIP Ladies tent. On-field, there was action aplenty. Southern Spirit posted 1/98 in their 20 over to account for Narara Wyoming 5/92 at Col Gooley Field, Umina Beach. Naomi Cattley was a standout for the Spirit side with 48 not out, whilst Lily Owen was Narara Wyoming’s best with 22 (ret).

Kerry Seymour 3/7 and Crystal Osborne 2/6 did the damage for the Blue Power. In reply, the Orange side passed the total in the 10th over, with Kerry Tye 20 and Samantha Thomas 15, leading the way. Warnervale Blue have been quietly going about their business all season, however on Saturday, they made their biggest statement when they accounted for Terrigal Matcham at Kurraba Oval, Berkeley Vale.

Batting first, Warnervale put together a solid 2/116 off their 20 overs, with Michelle Presgrave again impressive with 25 N.O., whilst Piper Hooke 21 (ret) and Mikaedy Sammut 20, set the innings up with an opening partnership of 47. In response, Terrigal Matcham struggled after star batter, Ella Merritt, was dismissed by Jess Holmes for 14 and they finished on 6/107, just 9 runs short. Emily Humphreys was again a standout, with the youngster finishing on 32.

Sammut rounded out a good match with 2/10 off her 3 overs, whilst Hayley Korocz also took two wickets. Warnervale White made it two wins for the club with a 5 wicket win over a shorthanded Lisarow Ourimbah at Paddy Clifton Oval, Narara. Batting first, the Magpies were solid in scoring 3/111, with Annalise Brewster 32 and Kylie Turnbaull 24, leading the way.

With only four players to protect the boundaries, Lisarow Ourimbah were not able to stop the Warnervale batters, with Jacinta Crawford making the most of the gaps to finish with 55 n.o. In the final game, Kincumber Avoca proved too good for Northern Power White at Taylor Park, the Entrance, winning by 21 runs.

After being sent in to bat, Miranda Moloney 48 (ret) and Veronica Brown 33 (ret) got the side off to a good start and skipper Laura Mercer, with 24 (ret), pushed the total to 146 off the 20 overs. Northern Power started the run chase well with Harmony Vince and Emma Raychaudhuri both retiring on 30 and 28 respectively, and despite a late flourish from Stacey McNeill 19 n.o., they finished their overs 31 runs in arrears at 4/125.

Spanish, flamenco, tango and modern jazz music to be performed at Green Point