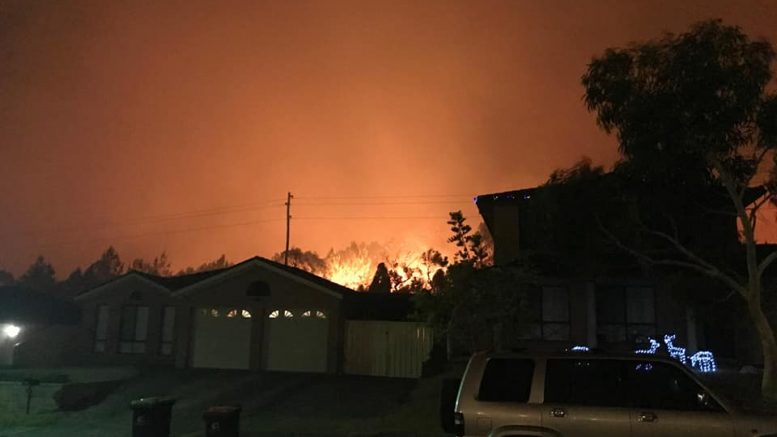 New year’s eve bought little celebration to residents of Charmhaven as a small fire grew into a furious blaze of over 400 hectares before being bought under control by fire crews later in the night and into New Year’s Day.

A small fire that started near Arizona Road at Charmhaven on the Central Coast progressed during the day. Firefighting operations were supported by several water bombing aircraft attempting to control the blaze.

The southerly change impacted the fireground and pushed the fire north toward Blue Haven and southern Wyee areas.

An emergency warning was later issued as the strong winds picked up at around 8.30pm.

Large ember attacks occurred on Birdwood Dr as the fire flared up and headed towards Blue Haven where multiple fire crews became involved in the response.

Crews worked on the first day of the year on strengthening containment lines of the fire so as to limit the chances of further flare ups.The RFS reporting that conditions had eased across the fireground, with the alert level downgraded to ‘Advice’ by the end of New Year’s Day.

The community expressed their gratitude to the fire fighters on social media. One local resident Lynnette Stagges summed up the response saying,

“A huge Thank You to all the RFS, Police and every other responders to the Fires in Charmhaven and neighbouring areas. You have done an awesome job, not only here but everywhere there has been fires”

Some good news spread across the community, regarding an incident where a NSW RFS firefighter spotted a scared possum and her baby crawl under a car.

The firefighter got to the driver just in time before the car was moved, and then spent time coaxing mum and bub out from underneath the car. The possums are well and were handed to RSPCA NSW for care and treatment.

Residents are advised to stay vigilant and keep use the Rural Fire Service’s Fires Near Me online tools and app (link provided here). Tune to ABC local radio 92.5FM Central Coast or 1233 AM Newcastle for emergency warnings and updates.