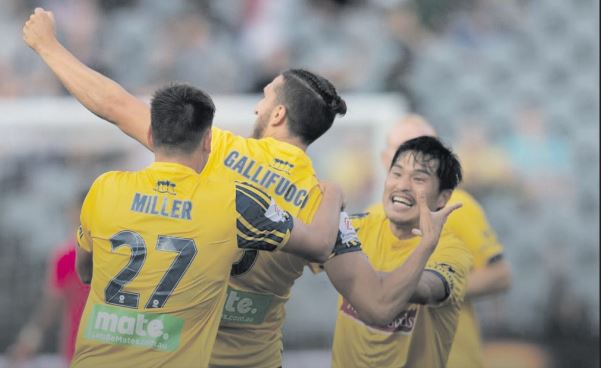 The Central Coast Mariners claimed their first home win of the Hyundai A-League season during Round 7, with a strong defensive effort keeping out Western United and ending a run of 38 games without a clean sheet.

Milan Duric started on the bench while Kye Rowles and Danny DeSilva returned to the line-up, and Lewis Miller and Eunsun Kim came into the side for their starting league debuts.

The game began at a tentative pace with neither side creating a clear-cut opening in the first 20 minutes. Western United keeper, Filip Kurto, had to look lively to race off his line to prevent Tommy Oar latching onto a long ball from defence, and on 25 minutes, Mariners’ keeper, Mark Birighitti was forced into a spectacular save to prevent Dario Jertec putting Western United ahead.

From the resulting corner, Ziggy Gordon blocked Andrew Durante’s header on the line as the Mariners fought to keep Western at bay, and not long after, Birighitti again made a spectacular save, this time to keep out a stinging free-kick from Alessandro Diamanti. Link-up play from Diamanti and Besart Berisha helped create space for a pass to Panagiotis Kone at the back post, but with plenty of space, he smashed his effort well over the goal and the teams went in equal at the break.

The break came at the right time for the hosts, and after forcing the ball into the Western United half after the restart, they took the lead in the 49th minute. A cross from the left was half cleared by Andrew Calver to Giancarlo Gallifuocco on the edge of the box, and his firsttime strike was deflected past Kurto and in, handing the midfielder his first Hyundai A-League goal and the Mariners their 500th.

United almost pulled a goal back moments later when Appiah found himself with room down the right wing to cross for Berisha, but he fired wide with the goal begging. The visitors continued to push for the equaliser. However, they found a resolute Mariners defence in fine form, with Miller slotting in perfectly at right back to the joy of the home faithful.

Not content with their one goal advantage, the Mariners pushed for a second to give them a little breathing space, but were denied by a superb diving save by Kurto again, as he took flight to keep out Jack Clisby’s curling effort from the top of the box. United had a chance to steal a point in the last five minutes after Diamanti won the ball back on the edge of the box, but once again, the Italian could not find the net, flashing a right footed strike wide of the post.

The win sees the Mariners climb to sixth in the table, just a win behind Western United and preparations begin to take on Brisbane in round eight.

Post-match Stajcic spoke about the importance of the Mariners’ youth development strategy and praised several young players who have been putting in work this season. Through Stajcic, Lewis Miller, Gianni Stensness and Sam Silvera, who are all scholarship players, all had their starting league debuts with the Mariners.

All three played well, with Miller excelling at fullback after a strong cameo role in Round 6, and the boss was full of praise for him post-match. “It was a big occasion, his first start in the A-League and I thought he did a fantastic job, ” Stajcic said. “He’s such a powerful young kid on the ball and there was one run there in the second half where he got a little bit confident which is definitely a trait of his.

“When he grows into a fullyfledged senior player he’s going to be superb and with a few more games and a bit more maturity we will have a great platform to build this club around, ” Stajcic continued.

“Three quarters of this team are new to the squad, and today we had three scholarship players starting, so to have three kids on the field starting and doing so well for us is really important.

“We are in the top six and we are certainly building a good foundation for the club to build on for the next period of time, ” he said.

Adding to the youth impact was Josh Nisbet’s introduction in the second half and he was crucial as the Mariners fought to keep their advantage with time winding down. “We have done a lot of work on getting the Mariners Academy back on track – all the team there, led by Ken Schembri and Nick Montgomery, are doing a great job and as a coaching team we are all working well together to help recruit and develop the players we believe have real potential, ” Stajcic added.

Mariners’ Chairman, Mike Charlesworth, echoed Stajcic’s sentiments around the club’s youth program. “It’s great to see the first team be competitive again and congratulations to Alen and his staff, ” Charlesworth said after Sunday’s win. “The Board and everyone involved at the club have all worked hard to get the club back on track and I am particularly pleased to see our young players come through the first team.

“This is testimony to the great work now being done at the Mariners’ Academy. “Apart from being competitive and winning games, we have also set our sights on creating the A-League players of the future and I am pleased to say that we appear well on track to achieve this target in the coming years, ” he said.

Mariners unlucky not to get three points against Melbourne Victory