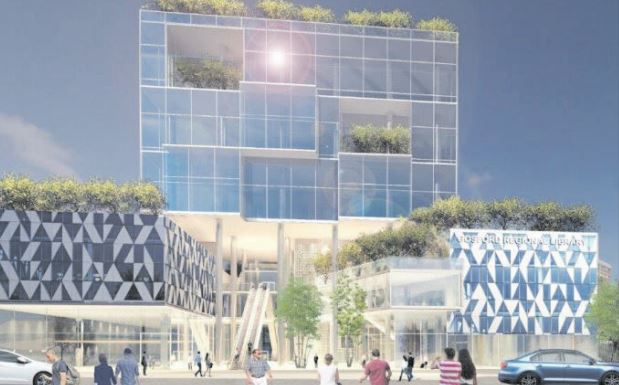 One of the two design options for a regional library put forward in February, 2018.

Central Coast Council will shelve plans for a Cultural Precinct in the centre of Gosford and push ahead instead with plans for a Regional Library as a separate project.

The Council had previously mooted a precinct on a large block of land between Mann and Donnison Sts to house a library, as well as a performing arts centre, linking walkways and car parking. In July, Councillor Greg Best raised concerns that the cost of the precinct could soar to well over $200M.

Council will now review the business case for a large precinct and focus instead on a Regional Library, which has been a topic of discussion for years, in an attempt to secure any available Federal funding.

In February, 2018, Council released two design plans for a Regional Library following lengthy discussions on where it would be best sited, asking residents to register their preference.

The first concept placed on exhibition at that time was for a library on a site at 123 Donnison St, while the second also incorporated an adjoining site to create a combined community, commercial and retail precinct to help with operational costs. But those concepts were shelved when Council began to discuss plans for a larger precinct.

Council decided last week to immediately review the two sites previously identified as possible locations, being the Donnison St site, known as Parkside, and a block in Mann St which formerly housed the Broadwater Hotel. Land acquisition negotiations relating to the precinct plan are to be ceased.

A report will be brought back to Council in December on a possible site, including a timeline for proceeding with design work, a development application and anticipated commencement and completion of works (subject to DA approval).

Meanwhile, Clr Best will put a motion to the next Council meeting on October 8 calling for the project to be referred to the Audit and Risk Committee for investigation and analysis and for any resulting report be released publicly in the interests of transparency.

Mayor, Lisa Matthews, said a region of our size and importance needed a Regional Library. Our community has waited a considerable amount of time for this project and tonight we made a financially responsible decision that means we are getting on with the job of delivering the Gosford Regional Library, Clr Matthews said at the September 25 meeting.

Items within the business case for the Gosford Cultural Precinct need further review and this process should not delay our regional library. This library will be a dynamic space for learning and innovation and a vibrant meeting point for our community to connect.

Delivering a regional library for the Central Coast is an important step towards meeting the ongoing social, recreational, educational, technological and business development needs of our community. It is unknown if designs put forward in 2018 will again be considered.