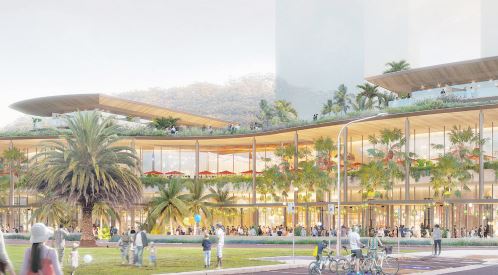 An initial artists impression shows an attractive new facade fronting Georgiana Tce, with the alfresco dining area looking across the road to Leagues Club Field, which is itself earmarked for a major redevelopment by the State Government. Two shadowy towers depicted in the image are part of the concept plan, but their use has not yet been determined.

Club Chairman, Peter James, said that while still conceptual, the masterplan put CCLC on a positive path towards diversification and enhancement of the experiences offered to patrons. Central Coast Leagues has been a centre point to life on the Coast for more than 60 years, James said. Were a familiar, much loved gathering place; built by locals, for locals.

Rich history inevitably comes with some challenges, and in our case, the challenge is an existing building that no longer reflects the range or quality of experiences we need to offer our patrons. Every journey starts with a single step, and this masterplan is the clubs first on a journey towards a truly modern, welcoming and fun future at Central Coast Leagues.

The release of the masterplan coincides with broader plans for Gosfords transformation, with the State Government already investing in revitalisation planning for the city, local infrastructure development and employment growth, along with its $10m Leagues Club Field revamp. Central Coast Leagues is not just a centre of community here on the Coast, were quite literally at the centre of the community, James said. Understanding that the state has plans to fundamentally transform neighbouring community amenities, weve taken the opportunity to articulate our place within a broader process of urban transformation.

James said the club has the potential to be an exciting, welcoming, gateway to a revitalised Gosford, with its strategic site positioned to be a point of connection between the city centre, station, stadium, parklands and waterfront. It also gives us the opportunity to fundamentally enhance the amenities and experiences we provide to members and guests while securing our position as a major employer and contributor to the local economy and community for years to come, he said.

When realised, the vision will generate 1,500 direct construction jobs and up to 400 permanent jobs within the precinct. This masterplan is all about cementing our place at the centre of a connected, vibrant, prosperous Central Coast. James said that the next steps for the Club would include more detailed exploration of redevelopment options, feasibiity and design.