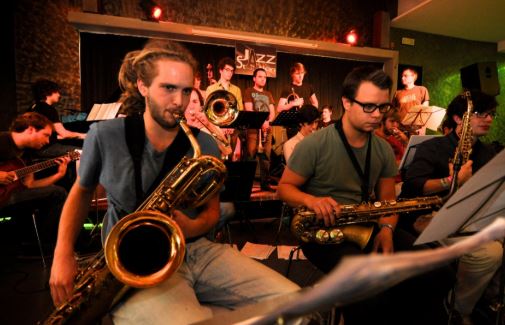 The Jazzleague’s, Ed and Esther Wilson, have started the youth big band as a way to give high school musicians the chance to gain some performance experience.

“Most serious music lovers in Australia will know of Ed Wilson from his days with the legendary Daly/Wilson Big Band when they were so successful during the 70’s and early 80’s; but it must be noted that his status as a musician was developing rapidly long before this, not only for his talent as a trombonist but for his skill as an arranger,” said Mrs Wilson.

The combination of the 20 musicians that made up the band was the perfect vehicle for Wilson’s exciting arrangements and compositions. Although the band had gained a strong following for their electrifying live shows around the country, the overheads in keeping the band on the road became a financial burden.
The band was put on hold for a while in 1971. “During this time Ed went searching for new challenges and found his way to England where he took up the trombone chair with the band at the London Palladium.
“In 1972 he was coaxed back to Australia when the band was resurrected with the added incentive of sponsorship from Benson and Hedges,” Mrs Wilson said.
The next seven years saw Wilson and the band tour constantly, both nationally and abroad.
They were one of the first Australian acts to perform in Russia.

The line-up was complimented by three great Australian vocalists, Marcia Hines , Kerrie Biddell and the late, great Ricky May. “The Daly/Wilson Big Band is an important part of Australian music history and leaves behind a legacy of half a dozen albums and indelible memories of sensational live shows,” Mrs Wilson said.

The Wilson’s have partnered with the Lions Club of East Gosford, who have graciously agreed to lend their hall for band rehearsals. The couple are now looking for keen young musicians and vocalists to join the band. “It is free to join and we have a never ending supply of swing and jazz rock music,” Mr Wilson said.

There is no performance experience required, but to be considered, all applicants must be able read and play Level 3 arrangements as a minimum requirement.