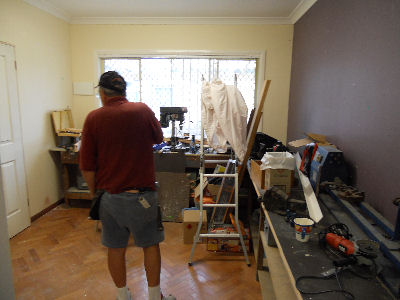 The inside of the current Umina Men's Shed is running out of room. Image: Mens Shed Umina webpage

A decision to lease land to the Umina Beach Men’s Shed for a nominal rent appears to represent a softening of Council policy on contracts for community facilities.

A proposal to lease land at go Osborne Ave, Umina to the Umina Beach Men’s Shed has been carried by Central Coast Council when it meet Monday, November 26. Central Coast Council staff recommended that Council sought expressions of interest for the lease and redevelopment of the land but mayor Cr Jane Smith put forward an alternative motion to advertise Council’s intention to enter a lease with men’s shed and call for submissions.

Cr Smith said if there was no community objection to the proposal. Council chief Mr Gary Murphy could be authorised to proceed with the lease. subject to a limited timeframe (10 years).

Cr Smith said she considered 10 years sufficient make it worthwhile for the Men’s Shed to proceed With a development application but not provide an unending arrangement. Several councillors said they believed this one-of decision raised some “process issues”. •I have been approached by Coast Shelter, Lions Club. community gardens and a poultry  club that finds itself without a home so what does this mean for next group that identifies a lot of land and brings it to Council to approve?- Cr Hagan said. “Every time I have come across this.

I have been told it has to follow due processes,’ she said. “I understand your point and I similarly want an open and transparent process,” Cr Smith “In my view there IS Willingness OJ allow Men’s Shed to use this land but opening up an expression of interest tended to be counter- intuitive,” she sail

“Is this the mode we should use to secure land for groups? Cr Doug Vincent asked.

“If this is the mode we can operate in should we be bringing motions for other groups along the same line?” he asked Mr Murphy responded that it could be. “My suggestion would be if you or any other groups have an interest in a particular block of land, or are seeking a block of land. to engage with staff at the earliest opportunity,’ Mr Murphy said.

He said the Umina Beach Men’s Shed had in this instance, approached deputy mayor Cr Chris Holstein who approached staff for advice.  I think that would be the process I would suggest to council. I am hearing there are a few groups out there and I would be encouraging that,” Mr Murphy said. “This is nine months old,’ Clr Holstein said. “Nine months ago the Men’s Shed. that currently operates out of an old house down near the retirement Village, were running out of space. so they asked if there was any land.

“I checked out parcels of operational land that might be a possibility and it took a range of time to go through all the possibilities,” he said. “The Men’s Shed asked to talk respective community groups. PCYC, Rotary, and the Umina Beach Community Group, to get their consensus.

“Only when we got the support of all groups we took it back to officers with a letter requesting the lease. “So this has been nine months of work seeking community input, advice of officers, we have ticked all the boxes and what ultimately came back is the opportunity to go forward.”

He said Umina PCYC was keen for young people to interact with the Men’s Shed. “The primary school supportive, so are the Rotary clubs and there is police involvement. “They have gone to State and Federal Members, the commercial sector, and all expenses related to DA are the responsibility of the Men’s Shed. “If we hadn’t gone out and done the consultation and community liaison I would have never told them to officially write to Council.”

Fellow Gosford West Councillor Troy Marquart said Cr Holstein had also liaised with him and Cr Richard Mehrtens. “So he went to both side of politics and worked through the right channels,” Cr Marquart said.