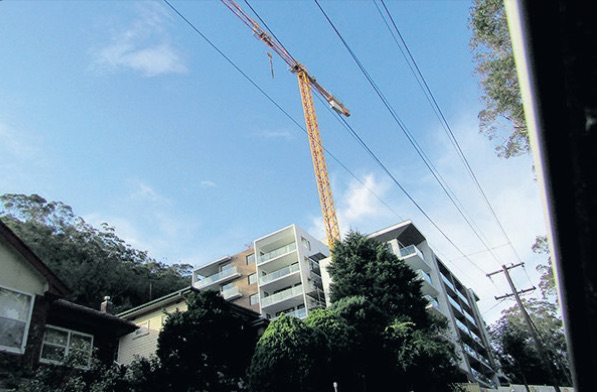 One of the many cranes over Gosford in 2018

Mayor Smith said a Sydney Morning Herald article had suggested that Minister for Planning. Anthony Roberts, would be appointing a Local Planning Panel on the Central Coast to determine DAs over the value of $5M. Smith said the Council’s planning system included a clear objective “to provide increased opportunity for community participation in environmental planning and assessment.

“It is imperative that Council be able to represent the community and remain as the consent authority for development on the Central Coast.”

“There is no need for independent planning panels to determine development applications, as decisions of Council are open and transparent, and Councils are elected to make decisions in the best interests of the community. “Our community must and should have a say in development that will affect their local area. “Developments with more than 15 objections are automatically reported to Council for determination and this is as it should be and what the community wants.

“This Council is committed to progressing development that is in line with planning controls and community expectations. “I understand the State Government may be seriously considering introducing these Planning Panels and I call on them to consult with Councils and the community, and reconsider this approach.” Council has recently consolidated its planning controls to apply a consistent approach across the Central Coast, which is out on exhibition. “The time is now to have a productive discussion about the planning controls we want on the Central Coast,” Mayor Smith said.

“I encourage everyone in the community and the business sector to get involved now, make a point of finding out what rules may affect you, what may change for your street or suburb, and if you have an opinion on the changes, make a submission to Council.” Details on the Consolidated Local Environment Plan (LEP) and Development Control Plan (DCP) can be found at yourvoiceourcoast.com. “Council is still keen to work with the state government in providing positive benefits for the Central Coast and our community,” Smith said. “Council and the community need to be at the heart of many of these initiatives.

“It is important the decision making process is held within Council. “I think it is fair to say that I have been disappointed by some of the moves by the State Government to take away planning powers from Council. “We have seen that in the Gosford City Centre, where there was already a lot of development happening that had come about from various initiatives. “The State Government came in over the top of that to create new planning controls that have created uncertainty.

“A push to introduce a Local Planning Panel would effectively again take away planning control from our local Council for developments over $5M.” She pointed to the Sydney Morning Herald article that stated the panels would be mandatory in assessing DAs valued at between $5M and $30M, not only in metropolitan Sydney and Wollongong, but also on the Central Coast and in Newcastle.

“I am aware that some in the community have been calling for that, and it is disappointing to see that call for planning to be taken away from our Central Coast community,” Smith said. She said planning panel positions are currently appointed by the Minister, but she hoped for “some improvement to that model”. “I think that fundamentally, these planning decisions need to be made by Council, because Council is elected to represent the people. “Transparency and accountability is best served at that local level, rather than state coming in over the top.

“I think the community has a reasonable expectation that through the amalgamation process, they have a Council that serves their interests. “With the amalgamation process being such a long process, at great expense to the rate payer and tax payer, it is disappointing that the State Government is now overriding the authority of our Council. “I am certainly keen to talk to our state MPs to get an understanding of their view on this.

“It is incumbent on them to represent our community and have a strong say on how we are ruled, rather than these decisions being made at armslength from our community. I think our Council is working very hard to deliver on the aspirations of our community and the targets in the Regional Plan, so we are already working hard with State Government and it needs to be cooperative, because both levels want the best outcome. “I think there could be a greater level of cooperation and it is disappointing the State Government is not striving to achieve that rather than coming in over the top of our Council.”

She said the delivery framework exhibited for future use of Darkinjung Local Aboriginal Land Council (DLALC) lands, which has been on exhibition, also raised some concerns. “The delivery framework seeks to remove Council as decision maker for development valued over $5M, and those not resolved within 40 days,” Smith said. “Bearing in mind that Council wants to work very constructively with DLALC to achieve their objectives, but most of their land is heavily constrained, not only environmentally, but also through infrastructure requirements and the need for infrastructure, so again this move by the State Government to effectively take away Council’s decision making role in considering those matters, I think, is ill considered.

“I think that when the State Government comes in and introduces these kinds of measures, it does undermine the confidence that the community has in the consultation process.”