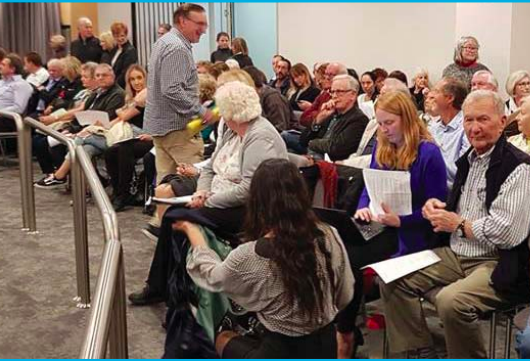 Standing room only in the public gallery of the Gosford Chamber. Archive image 2016

Central Coast Council will hold all its public meetings in the Wyong Chamber for the foreseeable future, because some councillors said they feared for their safety at Gosford.

Two Peninsula councillors opposed the move, decided at the November 29 meeting in the Wyong Chamber. Cr Lisa Matthews proposed the move, saying that the Gosford chamber was unsafe. “I propose that we don’t meet at Gosford until a serious audit has been done in relation to safety,” Cr Matthews said. She said there had been interactions between councillors and with members of the public that were too close and that she did not feel safe meeting in the Gosford chamber.

“I have been subjected to heckling and I am no longer wanting to tolerate it until we can be given the assurances that we are safe and I don’t feel safe in that chamber and I am standing up and asking fellow councilors to support me on this,” she said. However, Peninsula councilors, former Gosford mayor Cr Chris Holstein and Cr Troy Marquart, did not support the proposal. Cr Holstein said: “In that chamber, at times it has got boisterous and noisy, but I don’t know how the public will perceive that aspect of bringing all your meetings to the north. “It will disadvantage those who live in the south who wish to interact with their councilors. “I hope it is not an underlying consideration that councillors feel it is too far to travel. “I hear so constantly the disadvantaged north.

“Well, you have just disadvantaged the south by disenfranchising them by not having those meetings. “I don’t know if that is going to be conducive to good local government and I say that in times as the biggest target in the room. “By all means take some necessary steps but don’t disenfranchise the people in the south who want to come to council meetings.” Cr Rebecca Gale Collins also spoke in opposition. “I think it puts a divide between north and south which as an amalgamated council we should be able to be overcome. “I do not support a divide for our people, those in the south deserve to go to Gosford chamber just as those in the north deserve to come to Wyong. “I absolutely don’t support any divide and this has no merit.” Cr Bruce McLachlan said it would suite him personally for all meetings to be in Wyong but he could not support the motion and Cr Marquart also declined to support moving all meetings to Wyong. “I don’t think there is a hell of a lot of difference between Gosford and Wyong. We are getting a bit precious here.

We are not the Rolling Stones. It is just going to divide north and south. We don’t want to do that,” he said. Cr Greg Best supported the move: “I think the chamber and recent events have highlighted the tightness and restricted nature of that room. “This room is far far safer, I feel safer here and I am sure the public do too,” Cr Best said. Cr Kyle MacGregor said he had been physically threatened by multiple people in the chamber and the lifts at the Gosford Council building. “The issue with Gosford is that although there is a divider there, if some crazy person was to go over the top then there really is a very high chance of an incident,” Cr MacGregor said.

Cr MacGregor said he had full faith in the ability of Council staff to make appropriate changes to the chamber and he looked forward to going back to Gosford for future meetings. Cr Jane Smith said that all briefings, not open to the public, would be held in the Gosford Chamber until further notice. The motion to move all meetings to Wyong until a safety audit of the Gosford chamber was completed was carried. No specific timeframe has been established for the return of meetings to Gosford. Gosford Chamber was remodelled during the administration period following the sacking of Gosford Council. Tiered public seating was replaced with unfixed chairs behind the 15 Councillors and separated from the councillors by a balustrade. The renovations were to accommodate 15 instead of 10 councillors.

From combat to wombat: Scomo visits the Coast