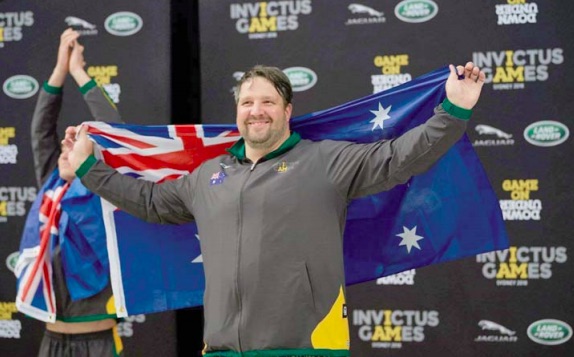 Terrigal resident, Luke Hill, has returned from the 2018 Invictus Games with a bronze medal. Hill represented Australia as part of their swimming team and competed across eight events over the Games.

His best performance was in the 50m Breaststroke finals, which saw him secure the bronze medal. Hill just missed out on the podium in the Backstroke finals, recording a fifth place finish. He also made it to the Freestyle finals, recording an eight place finish. Hill joined the Australian Defence Force in 1997, serving for six years until his retirement. It was a special Games for Hill, who received a visit from his three children and 70 other children from Erina Heights Public School during his Freestyle campaign.

Hill’s children, Kian, Jude and Tehya, all attend Erina Heights Public School and made the journey to Sydney with their classmates to cheer on their dad. The group put on a dazzling display of green and gold with a flurry of handmade signage, cheering louder than most competing countries’ support teams during the Freestyle event. Luke and his wife Kirsty had no idea that the school was planning the trip, until Erina Heights purchased the tickets for the three year levels that their children are in. “It was a big surprise,” said Kirsty.

“It made me cry when I saw them all come in and I could tell my husband saw them straight away with a massive smile on his face, so it was really good.”

Luke explained how he felt seeing (and hearing) the children cheer him on. “It was amazing. “You could hear them as I came out and as I finished, my whole team commented on how loud they were,” said Luke. He had visited the school before the Games to educate the children about veterans and the Invictus Games. “It’s great that they were able to come down,” he said.

Little penguins and seabird rescue talk to be held

No PEP11 drilling under this Government – Wicks