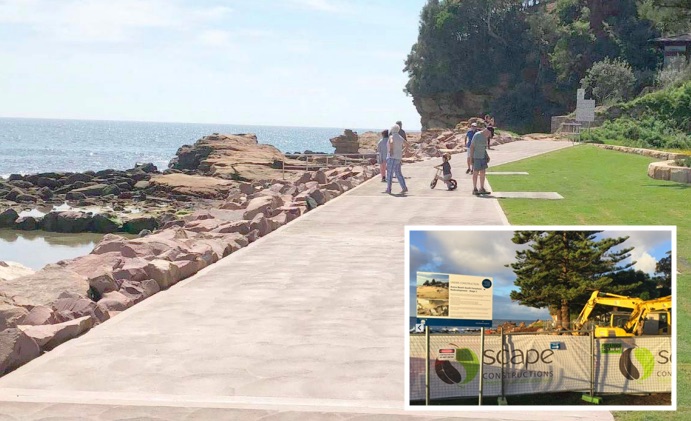 Stage One of the Avoca Beach foreshore works are complete. Inset - while under construction April 2018.

Central Coast Council has completed the first stage of the $2.8m coastal foreshore works at the southern end of Avoca Beach, in preparation for a bumper summer beach season.

The works, funded by the NSW Government as part of the Stronger Communities Fund, will improve the infrastructure and amenity of the area as well as deliver important coastal protection and rehabilitation works to stabilise the foreshore. Council Acting Director, Assets Infrastructure and Business, Boris Bolgoff, said the upgrades will deliver a more attractive, safe and more accessible foreshore area for the local community and visitors to the area. “Council is very pleased that this first stage of works has been finished on time and we thank the community for their patience during the construction period,” Bolgoff said.

“This first stage of works was designed to deliver an engineered and purpose built rock sea wall next to the rock pool in order to stabilise the foreshore area and we are really pleased to have achieved that. “As part of these works, we also relocated the drainage outlet to the eastern end of the rock pool, renewed the existing walkway between the surf club and eastern rock shelf, and incorporated some landscaping.

“In April next year, we will start the second stage of works, which will involve rebuilding the smaller rock wall, improving the ramp near the surf club, upgrading the beachfront walkway and providing additional landscaping,” Bolgoff said. Central Coast Mayor, Jane Smith, said the project was a great example of Council investing in projects that the community has identified as a priority.

“These works were originally identified in the Avoca Beach Masterplan in 2012, and we are really pleased that, with the help of funding from the NSW State Government, we will be able to deliver a revitalised foreshore area for the community,” Mayor Smith said.

“Avoca Beach is a very popular area for residents and visitors alike, and these works will ensure that the foreshore area will be more resilient to weather events, and continue to deliver for the community as one of the Coast’s most iconic and historic hamlets,” she added. Member for Terrigal, Adam Crouch, said the State Liberal Government was proud to fully fund the project through the Stronger Communities Fund. “This funding is a direct result of the successful amalgamation and creation of Central Coast Council,” Crouch said. “Avoca Beach already plays host to the annual Central Coast Pro and is recognised internationally as the home beach of many world-class surfers.

“I’m pleased the Avoca community has embraced this infrastructure upgrade, and I look forward to Council continuing with stage two of the foreshore upgrade after the busy summer season,” he said.

This project is one of 10 local projects made possible through the Stronger Communities Fund, established by the NSW Government to provide merged Councils with funding to kickstart the delivery of projects that improve community infrastructure and services.