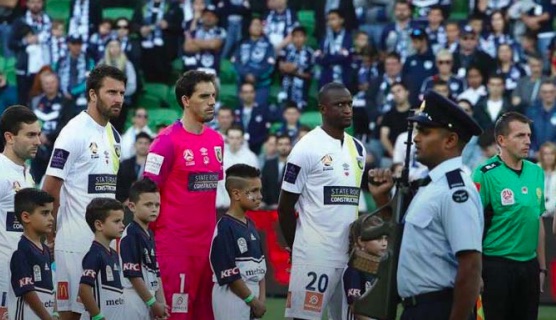 Playing away to Melbourne Victory on Sunday, November 11, in round 4 of the A-League, Central Coast Mariners conceded three goals in the first half, and ended up losing the match 4 to 1.

The team’s second consecutive loss begs questions of Head Coach, Mike Mulvey’s, formation choices and exposes the Mariners’ obvious weaknesses in defence and mid-fi eld. The Mariners started strong but, after an end-to-end opening 30 minutes, Victory’s marquee man, Honda, opened the scoring by pouncing on a Mariners’ defensive blunder. Five minutes later, James Troisi, capitalised on an impressive first half performance to double his side’s lead. Then, with almost the last kick of the fi rst half, a shot from, Terry Antonis, deflected to, Corey Brown, who was on hand to fi re his shot into an open net and give his side a 3-0 lead at half time.

A much-improved Mariners team came out for the second half, looking determined to make amends for their first 45 minutes. Connor Pain was making the most of his return to the starting team and was one of the Mariners’ best, creating most of the away team’s chances. Just seconds into the first half, his pass to, Tommy Oar, almost set up a goal, but the shot was saved by Thomas. Most of the Mariners’ chances came from the left, started by Pain, but Victory’s defence stood tall to keep them at bay. Mulvey’s substitute paid immediate dividends in, Mario Shabow, who was in the right place at the right time to flick home a shot from, Ross McCormack, to put his side back in the hunt.

The goal was Shabow’s first in the Hyundai A-League. Despite a much improved second half, Victory’s substitutes combined in the 94th minute, to cap off a 4-1 win at AAMI Park. “You can’t give a team like Melbourne Victory chances to score goals, because they’re good enough to score themselves,” Mulvey said post match.

“The first 20 minutes, we were in the game with a couple of chances, then the soft underbelly reared its ugly head again. “In the second half, we were the better team. “I said to the lads, I can stand here and congratulate you for the second half performance, which I thought was really bold. “They answered some of the questions I asked them at half time. “But you need to play two halves of football. “You can’t concede three goals in the fi rst half then come to life in the second half, it’s not good enough. “When I came here, it was a club that was accepting of failure. “That’s not good enough for any organisation. “We had a big change after the end of last season.

“We’re still giving away the same opportunities, we need to stand up and eradicate those mistakes. “I could stand here and wax lyrical about how good we were in the second half, but that means nothing when you lose three points. “We didn’t follow runners from midfi eld. “Our marking was slack. “The lads know that, it’s collective, it’s not an individual thing,” Mulvey said. Due to an international break, the Hyundai A-League will take a one week hiatus before the Central Coast Mariners travel away to face Perth Glory on November 25.