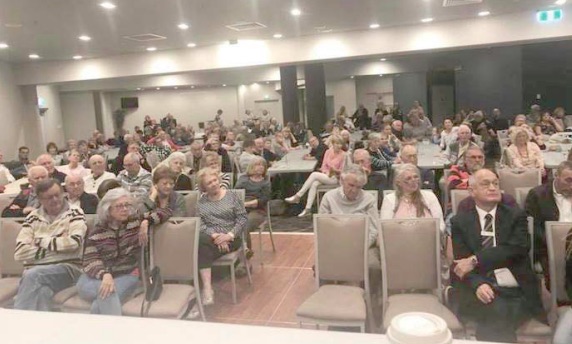 Meeting about dredging at Ettalong Diggers in September 2018

The Peninsula Chamber of Commerce has been advised that delays to dredging work on the Ettalong Channel are likely to mean the ferry service may not resume until the end of November.

“Unfortunately, we have been advised that the prolonged wet weather and rough sea conditions have prevented the completion of the last of the dredging works”, said Chamber president Mr Matthew Wales. “The contractor still has several weeks of work to undertake at both the mouth of the channel near Little Box Head and in the Lobster Beach channel before additional trial runs by Palm Beach Ferries can occur,” Mr Wales said.

“The Chamber is advised that these trials may not occur until mid-November,” he said. “Palm Beach Ferries, the contractor, and Crown Lands have been liaising closely to ensure that the dredging works are completed quickly and that the work is as effective as possible. “We are pleased that the NSW Government has pledged the $660,000 in emergency funds so that this work can be undertaken and that they are committed to ensuring that the channel is fully operational. “Significant improvements to the channel are already evident and it is hoped that the current works will ensure safe passage for commercial and recreational craft over the summer period and well into next year.

“What is now important is that Central Coast Council allocates funds in their capital works budget to match the Rescuing Our Waterways Program funding of $1.225m recently pledged by the NSW State Government. “This is vital so that a long term dredging solution can be implemented to keep the channel navigable and ensure that our local beaches are renourished”, said Mr Wales. Member for Terrigal Mr Adam Crouch, said: “Resumption of dredging is entirely weather dependent and is determined by the dredging operator.

“I encourage Council to continue working with all stakeholders, including the Peninsula Chamber of Commerce and local businesses, to implement a long term maintenance plan so that we never see a repeat of the past 12 months,” Mr Crouch said. “The NSW Government remains absolutely committed to ensuring this local waterway remains safe and accessible to all,” he said.