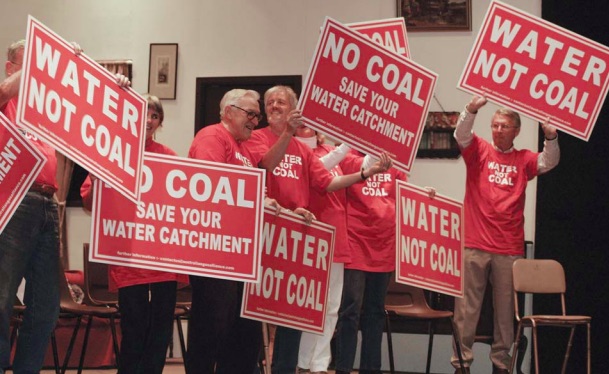 A previous demonstration against the coal mine. Archive

The legal challenge by the Australian Coal Alliance (ACA) to the validity of the approval to mine beneath the Central Coast’s major water supply district will be heard by the Land and Environment Court on November 12.

“The court action is estimated to run over four days,” said ACA spokesperson, Alan Hayes. He said the outcome of the case should concern all residents of the Central Coast who rely on the region’s water supply. “The ACA will be holding a protest rally on November 12, the day the legal challenge commences, at 10am, at the top of Martin Place, Sydney.

“All concerned Central Coast residents are encouraged to attend, if their schedule permits, to demonstrate their unity and concern. “We contend that the Planning Assessment Commission’s approval of the mine in January was unlawful, because it failed to consider certain aspects of the mining State Environmental Planning Policy and other criteria,” Hayes said.

“The mining company has put off to a future date certain things that were required to be done prior to the consideration of an approval and a mining licence being granted,” he said. “It was incumbent upon the Planning Assessment Commission to reject the mine proposal unless the mine proponents had fully satisfied all requirements for the mine to be approved, and this was not done. “The proponent of the 28 year mine project, Wyong Coal Pty Ltd t/as Wyong Areas Coal Joint Venture, is majority owned by Korea Resource Corporation (KORES), the mining arm of the South Korean Government. “Wyong Coal are seeking a licence to build a longwall coal mine directly beneath an essential water resource, which is opposed by the community and Central Coast Council.

“The campaign to prevent this mine from becoming a reality has been ongoing for 23 years. “Protecting our drinking water is paramount. “It cannot be put in jeopardy because of the machinations of a mining company. “The ACA’s Senior Counsel said that our prospects of success are excellent. “The ACA issued a summons against the mining company and the Minister for Planning in April, which seeks relief that the determination by the Planning Assessment Commission (PAC) granting consent on January 16 was invalid and of no effect. “There are 10 different grounds, which include a number of sub grounds, that the ACA is challenging the PAC’s consent on.

“The ACA has brought the court action in the LEC because it is in the public interest to do so. “You have to stand up for what you know is right and not allow a mining company to destroy something as important as our drinking water supply. “It has always been a ‘no ifs, no buts, a guarantee’ that the ACA would not buckle under to pressure, but continue to fight on the behalf of Central Coast residents. “No one has the right to jackboot their way across communities to satisfy their greed and avarice.