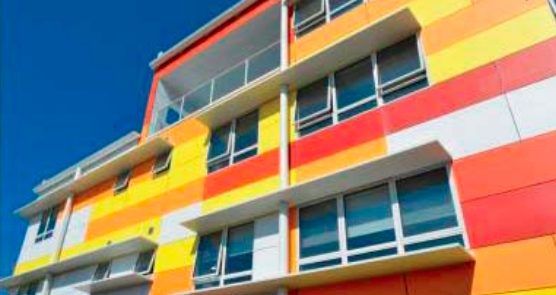 An affordable and social housing development at Woy Woy

Central Coast Council is planning to increase population density and residential building heights within 400 metres of Woy Woy town centre in an attempt to create affordable housing in the area.

The numbers of one- and two bedroom units would be increased, if its draft affordable housing strategy is adopted. The council would also “promote” the development of boarding houses in the area. Parking requirements could be reduced to one parking space for two bedroom apartments and as few as 0.2 spaces per room for boarding houses. The minimum building height could be increased to at least 11.5 metres “to facilitate the construction of multi-dwelling housing and residential fl at buildings”. The changes would be implemented through a Development Control Plan where defined limits are treated as guidelines only and may be exceeded.

The draft affordable housing strategy, currently on exhibition, states: “Without deliberate intervention through the planning system, and the active creation of affordable and alternative housing through direct funding, partnerships and innovative models of housing and service delivery, the situation is likely to worsen.”

However, the primary thrust of the strategy on the Peninsula appears to be a conventional rezoning approach, aided by developer bonuses. The only “innovation” appears to be the opportunity, under a “density bonus” scheme, for the council to take ownership of a number of units in the area, which it would then lease on to a community housing provider for rental as affordable housing “in perpetuity”.

Previous innovative plans to offer affordable housing on the Peninsula using “tiny houses” appear to have been dropped. The draft strategy, prepared by Judith Stubbs and Associates, defines affordable housing as costing less than 30 per cent of gross household income. The draft strategy acknowledged Umina and Blackwall being included in the lowest third of housing affordability in Australia.

The area is less affordable than Greater Sydney for local residents, with higher rates of housing stress and higher rates of growth of primary homelessness and the marginally housed, the strategy states. “Strong leadership is needed from Council to develop a collective approach to these issues,” said the strategy’s author, Dr Judith Stubbs. At a general level, the strategy acknowledges that the private market delivers the majority of local housing but “there is compelling evidence that the market is failing to supply affordable, diverse housing for the vast majority of those who need it,” the strategy said.

“There are virtually no market delivered housing products affordable to very low income renters in any part of the LGA.” Caravan parks are the only affordable housing available to “very low income renting”, according to the strategy. “Specific strategies to increase the supply of non-market or more deeply subsidised housing are required. “This includes stronger (or mandatory) intervention through the planning system to create affordable housing in perpetuity through mandatory contributions; and the direct creation of affordable housing, for example, on publicly owned land in partnership with a registered community housing provider.”

The strategy recommends that Council directly creates social and affordable rental housing for lower income key workers, older pensioners, retirees, people with a disability, people at risk of homelessness, very low and low income families. “This is the only effective strategy in the current and future housing context for such groups.” Under the strategy, the Council would consider appointing a special Housing and Homelessness Officer. It could convene and support an appropriate homelessness taskforce to develop, implement and monitor progress on relevant actions. It would advocate to State Government for a fair and equitable increase in resources to meet growing homelessness.

A structured pilot would be conducted with real estate agents to build relationships with local homelessness services, raise the profile of homelessness, and take positive action on housing formerly homeless people. Another pilot would be a transitional housing model to support effective transition to the private rental market for homeless people. Home share opportunities would also be explored in under occupied private housing, for example, an older person sharing their home with a younger person at risk of homelessness.

Council would provide information to the community on issues of homelessness, the rights of homeless people and how the community can support and include homeless people in public space. Exhibition of the Draft Affordable and Alternative Housing Strategy for public comment has been extended for six weeks and can be viewed at yourvoiceourcoast.com/affordable-and-alternativehousing-strategy

This story appeared first in The Peninsula News print edition 456 – at distribution spots across the region.