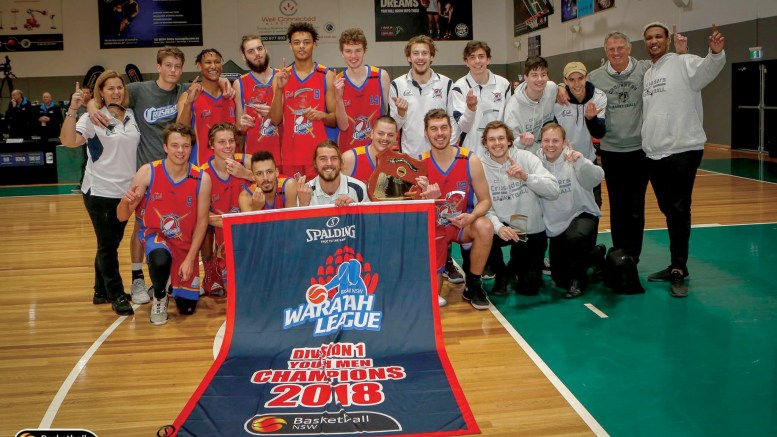 The victory adds to the Crusaders’ 2011, 2013 and 2016 victories in the Youth League Men division, and caps off an impressive season for the coach, Chris Ohlback, and his young squad.
Led by a break-out 20-point performance from, Max Cooper, the Crusaders led from start to finish in a complete reversal of their previous two encounters with the Panthers.
With key scorers, Tom Akamarmoi and Ollie Robilliard, held to just 8 and 9 points respectively, by a tenacious Penrith defence, point guard, Richmond Whitmore also stepped up to the plate pouring in 16 points of his own, to help power his side to the win.

With a large travelling contingent cheering them on, the Crusaders had earlier put the Newcastle Hunters to the sword in a come-from-behind 84-71 win in the semi-final.
Despite 20 points from the Hunters’, Jacob Foy, the Crusaders overcame a 9-point half-time deficit and took the lead midway through the third period.
With Robilliard recording a game-high 22 points, and Akamarmoi pouring in 20 points of his own, the Crusaders cruised to a double-digit lead in the fourth quarter to book their grand final spot.
The success of the young Crusaders team underscores the hard work put in by the Central Coast squad throughout the season.

With both, Tom Akamarmoi, receiving an All-Star Five spot, and, Ollie Robilliard, receiving the Defensive Player of the Year award, the Crusaders compiled an 18 win, four loss regular season record to finish first in the Youth League Men Division 1 Competition.
The championship win comes on the back of the Crusaders, shock semi-final loss in the 2017 season, where they fell to eventual champions, the Blacktown Storm.
With several of the Crusaders, key players graduating from the Youth League age group, the emphasis will be placed on the younger members of the squad to step up into the gap left in the 2019 season.