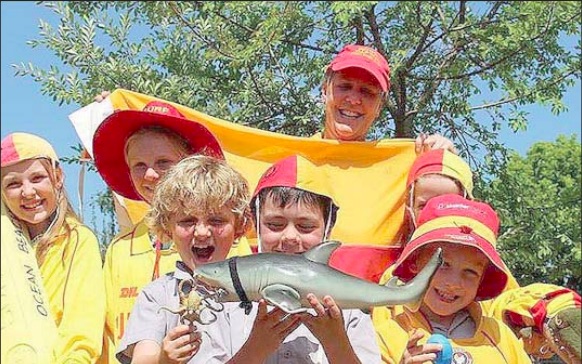 Ms Louise Lambeth with children on a Beach to Bush tour

The author of Surf Life Saving Australia’s newest children’s book has given a talk about the book at Ocean Beach Surf Club on Sunday, July 29.

Ocean Beach life saver Ms Louise Lambeth said her new book, Annie and the Waves, was the culmination of five years of work. Annie and the Waves was inspired by her work with Surf Life Saving NSW’s Beach to Bush Program, which sends life savers to rural areas to educate families, communities and children about beach safety. “At least 50 per cent of people rescued by surf lifesavers live more than 50km away from the coast and sadly more than 50 per cent of people who drown live more than 50km from the coast,” Ms Lambeth said.

“Beach to Bush aims to educate young people and their families in rural areas about safety at the beach and other aquatic environments. “The program is a one hour interactive surf safety presentation delivered to school children by experienced and enthusiastic surf lifesavers. “My family and I have completed four tours with the SLSNSW Beach to Bush Program from 2012 to 2015. “We have toured many areas including Parkes, Forbes, Armidale, Inverell and Merriwa. “The smallest school had four pupils and the largest around 700,” she said. Ms Lambeth’s book tells the story of a little girl named Annie as she and her family go on a seaside holiday for a week. During the visit Annie discovers just how unpredictable the ocean can be. Creating a surf education resource from a child’s perspective was something Ms Lambeth has wanted to do for a long time.

“While there are child-focused surf education resources, there are no children’s story books from the perspective of a child. “My aim for Annie was for her to go to people that may not have access to surf education,” Ms Lambeth said. Ms Lambeth has urged people to get talking about Annie and the important messages about ocean safety she can teach to children. “I’ve written the book but that’s where it stops,” Ms Lambeth said. “It doesn’t go any further unless somebody buys the book, or gets the book from the library and reads the book, so I think the most important part of this journey now is not with me it’s with the parents, caregivers and teachers that will read the book to the children and pass that message on,” Ms Lambeth said.

Annie has been a labour of love for Ms Lambeth who will not profit from the sales of the book, instead of passing the proceeds onto Surf Life Saving Australia. “Annie is now in colour illustration and almost ready for typesetting and printing,” Ms Lambeth said. “The Peninsula community has played a large part in helping to get ‘Annie and the Waves’ to illustration and now to the publication stage. “This support has included attending or donating to fundraising events to pay for the illustrations, test reading the book, project management advice and most importantly by encouraging and not letting me give up when the tasks to publish became overwhelming,” Ms Lambeth said.

Board and Ski Series Round One held