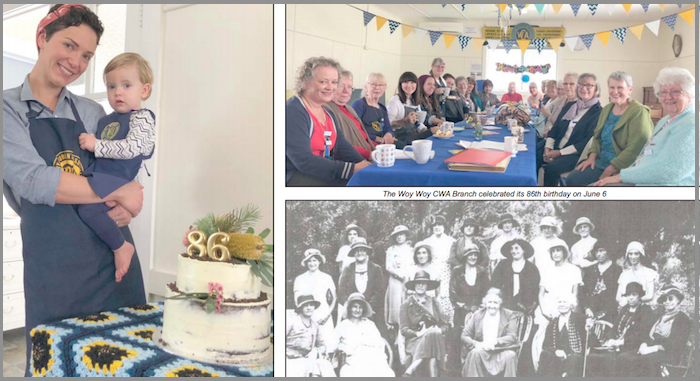 Members held a birthday luncheon to celebrate the milestone and to reflect on the history of the organisation. “The Country Women’s Association of NSW was formed at a time when it was seen that there was a need to improve the conditions of women and children on the land,” said branch historian Ms Barbara Atkins. “There were very few amenities in the country areas and there was a desperate need for baby health services, maternity hospitals and ambulance services. “Most country roads were unsealed and, after rain, road travel was often impossible.

“A Bush Women’s Conference was held in Sydney during the Royal Easter Show in 1922 and the Association was born,” Ms Atkins said.

“The Woy Woy branch was founded in 1932 by Mrs Staples who ran the organisation from her home and laid the groundwork for what the branch has become today,” Ms Atkins said. According to Ms Atkins, the association was instrumental in establishing baby health centres across NSW. “The Woy Woy hall first started out as one such baby health clinic in the mid 30s and was run by a nun known as Sister Lampe. “I remember taking my own children there in the 60s and that was my first contact with the Woy Woy branch. “

I joined officially in the early 90s and I’ve been with the branch for so long that I’m now their acting historian,” Ms Atkins said. Despite how far the Woy Woy Branch had come, there were fears following the 80th birthday celebrations that the branch was on its last legs. “We had seven members at the time and we were all getting on in years and we generally thought that this was our last hoorah and that our branch had run its course. “But we suddenly had an influx of members, including our now president Jane, and now we are thriving and our membership continues to grow,” Ms Atkins said. Branch president Ms Jane Bowtell said: “We don’t all bake. “We don’t all do craft. “We don’t all knit or crochet, and we don’t all make jams and pickles. “What we do make is a team – a team of diverse ladies who help each other, look out for each other and nurture each other while supporting and giving to our community,” Ms Bowtell said.

Aside from their birthday, the branch was also celebrating the initiation of two new members, Ms Theresa Gibson and Ms Johanna Reygersberg, who received their badges in late May. The president commended the efforts of member Ms Peggy Bond, who recently donated a large number of hand knitted beanies to Coast Shelter and Twiddle Muffs to Evergreen Life Care. She also called for help to solve the mystery of a lost painting. “We are hopeful that someone in our community may know what happened to this painting (pictured),” said Ms Bowtell. “It was auctioned off at the Gnostic Mana Cafe some time ago. “If anyone knows anything about the artist, the buyer or where the painting may be now please do get in touch with us we would love to find out more about this little piece of local branch history,” Ms Bowtell said.