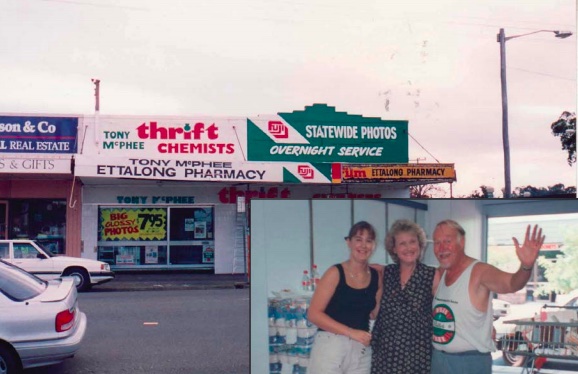 A well-known Ettalong family business has celebrated its 50th anniversary during June. Mr Tony McPhee acquired the Ettalong Pharmacy in May 1968 and, 50 years later, the successful family business is run by his son, Stephen.

Mr McPhee senior said he had purchased his first pharmacy in Sydney, when he was 24, not that many years after graduating from Sydney University. “I was happy where I was but a late trader opened down the road from me and it was like being in gaol starting early and finishing after dark,” Mr McPhee said. “It took six months but I liked black fishing so I said I would sell through the wholesaler if he could find me a business somewhere along the Coast,” he said. To this day, he describes the local black fishing at Ettalong as “wonderful, right off the end of my jetty”. Mr McPhee had worked as a shop assistant in the Sydney pharmacy which was his first business since the age of 11, “delivering scripts and washing bottles”, he recalled, but his first career choice was not pharmacy. “I wanted to be a school teacher but the NSW Government wouldn’t have me because I was asthmatic,” he said.

“When the pharmacist heard that the NSW Government wouldn’t accept me he called and suggested I should become a pharmacist, see how things happen, all because of asthma,” he said. The fishing may have been good but Ettalong, 50 years ago, was “so quiet I thought I had made a mistake”. “You could cross over the dirt road without seeing another person,” he said. In May 2018 Mr McPhee said he was thankful to the many loyal customers, family members, and 11 long-term staff members for the enduring success of the McPhee Ettalong pharmacy. Son Stephen was a toddler when the family moved to Ettalong but he is now running the business with father Tony working in the shop part-time. Both Stephen and Tony said the success of the Ettalong Pharmacy has a lot to do with its location, garnering regular customers from the Bouddi Peninsula, Daleys Point and St Huberts Island as well as Booker Bay, Ettalong, Blackwall and Umina. “Ettalong is a good strip centre and it has always been easier to park here than in Umina,” Mr Stephen McPhee said.

“Our location is central, we have many loyal customers, excellent loyal staff and competitive pricing,” he said.

Stephen’s sisters worked behind the counter in the shop and it seemed natural for him to follow in his father’s footsteps, helping in the shop from a young age, “finding coins under the scales and lollies on the way home from school”. He too studied at Sydney University and completed his apprenticeship with his father. Uncle Michael also moved up from Sydney and did his apprenticeship with Tony. Both Tony and Stephen said the staff had made the business what it is today. Ms Sharlene Lamb has been an employee for 40 years and both McPhees rattle off the names of some of their other employees: Britt (five years), Lynne (25), Jodi (18), Glenda (18), Michelle (19) and Julie (20). “I have four young children but I envisage my daughter will be wanting to work behind the counter when she is a bit older,” said Mr Stephen McPhee. McPhee Pharmacy has two weeks of celebrations planned to share the milestone with their customers and the community.