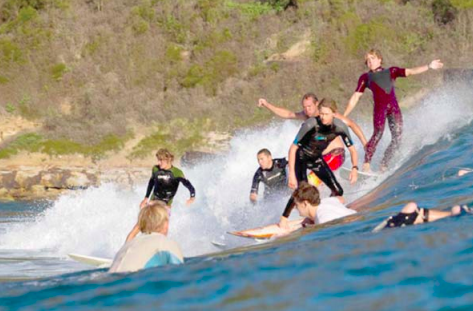 A surfers eye view of The Box surf break.

The Peninsula’s famous surf break, The Box, is an east coast treasure and Central Coast Councillor Bruce McLachlan wants to protect it.

On several occasions during the protracted debate on dredging in Central Coast Council, Cr McLachlan has stated he would support dredging the navigation channel for Brisbane Water if The Box was protected. Cr McLachlan said he grew up surfing and had the privilege of surfing The Box, when it was running, at least half a dozen times through to his 30s. “The last time I surfed it we walked down through Lobster Beach and got attacked by the mosquitoes,” Cr McLachlan said. Old-time Peninsula surfers argue that The Box should be kept a local secret but Cr McLachlan said when The Box is running, the surfers come from near and far. “The crowd is massive.

“It’s not a secret any more. “Tommy Carroll and all those surfers used to come over in their boats from the northern beaches.” What’s so special about The Box? “It is just the length of ride and the sandy bottom, the barrel you can get. “You can get Indonesian perfection on the Central Coast. “The length of the ride is probably the key to it, it is one of the longest-running left-handers on the east coast of Australia.” Cr McLachlan is fearful, based on his examination of aerial photos, that if the dredge was run through the middle of the existing sandbar it could ruin The Box. “If they maintain the existing channel they could actually enhance it,” he said. Cr McLachlan had submitted amendments to proposed motions attempting to direct the use of spoil from any channel dredging towards the enhancement of the surf break.

“In my amendments I wanted them to consider where they were going to put the spoil. “My amendments were about consideration and enhancement of the surf break at The Box,” he said. “I just want the surf break to be a consideration in all our future plans. “Whether it is rock groins or even artificial reefs and enhancements of what we have got. “We build all sorts of other sporting arenas and I think surf breaks are our sleeping giants,” Cr McLachlan said. “It is a natural resource that we don’t want to muck up.”